Vivian and I have had our little baby girl Hannah home for a couple days now, and we’re quickly becoming adjusted to the mind-boggling idea that we’re now parents. Here’s how it all came down last week. Vivian had been diagnosed with pre-eclampsia and put on bed rest the week before our baby came. She went in for a check-up the following Monday, which included an ultrasound that revealed our baby to be in the “breech” position. Vivian’s doctor decided to perform a c-section the next morning at Bergan Mercy hospital rather than risk Vivian going into labor with a baby facing the wrong way.

It was an amazing bit of news to digest, and I have no idea how I got any sleep the night before (Vivian actually got no sleep whatsoever). We celebrated the news of our forthcoming little one with a “last meal” as a childless couple at Ruby Tuesday around the corner. The next morning, Vivian and I showed up at the hospital at 6:30 for a couple hours of paperwork and preparations before the big moment came. I got all scrubbed up and ready with my fully-charged camera to capture every moment in the operating room.

Vivian went in for surgery at 8:30, and by 9:07, our little daughter Hannah Marie emerged from her womb covered in blood and vernix, making her a “cheesy” baby. (Is anybody surprised?) The nurse cleaned her up and then we settled into the recover room for a few hours as I busily told everyone I could the happy news via cell phone. The long recovery came after the baby was delivered on Tuesday. I got to dive headfirst into fatherhood changing my own baby’s diaper and giving her a sponge bath when needed. We had a steady parade of visitors dropping by over the course of our hospital stay, namely Dennis and Kara, Randy and Jolene, Eric, Venche, Lexi, Pastor Drew, and a few others. There’s nothing like a baby to draw in a crowd, and we had plenty of picture of our little bundle of joy flying around social media with every visit.

Vivian’s stay extended through Thanksgiving, so we had a makeshift Thanksgiving Dinner with her folks in the hospital’s dining hall. They had all the typical Thanksgiving foods for us, and it was a nice reprieve from our little room in post-partum. Vivian and the baby were released from the hospital on Friday, and I got to figure out how to use a car seat in our effort to get little Hannah home safely during her very first car ride. Since then, we’ve been learning her schedule for feeding and sleeping, which seems to be a bout of “cluster feeding” during the day followed by long period of near comatose sleeping during the night. Lucky us.

My brother Jonathan dropped by over the weekend to see his new niece (as did Maggie and Eric) and he stuck around Sunday night for our “real” Thanksgiving dinner with Grammy and Grampy Taber. Naturally, there was plenty of baby-holding and baby-feeding in the midst of stuffing ourselves with another enormous Thanksgiving meal (which included perennial favorites like green bean casserole, Taber salad, that green fluffy stuff, and poppy seed rolls to go along with the turkey and stuffing).

It’s been quite an adventure becoming parents so far, but we’re getting quickly settled into home life once again. Of course, we’ve had a steady stream of visitors coming by to see our new little girl. I have a feeling we’re going to see the most-photographed generations in history, if our friends below are any indication. 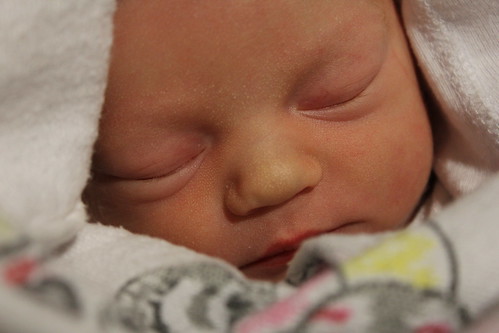 Ladies and gentlemen, meet Hannah Marie Johnson, born 11-22-11 at 9:07 a.m. weighing 5 lbs. 9 oz. and measuring 19 inches long. On Monday, Vivian got a checkup with an ultrasound that showed little Hannah was “breech,” so our doctor scheduled a C-section the next morning. They didn’t want Vivian to go into labor and risk delivering our little girl feet-first into the world.

The baby is doing just fine, and mom is sore but recovering quickly. If you’d like to see more pictures of our special delivery, you can view them on our Flickr account.