We’ve enjoyed a fairly quiet week or two here at the end of February. Vivian and I went back to Omaha Sushi with her parents to celebrate their anniversary with another round of all-you-can-eat sushi. Donna swears the restaurant lost money on the transaction. Then we got to have Hannah’s friends Sammy and August over for some Saturday morning babysitting, the latter sleeping through the whole visit. 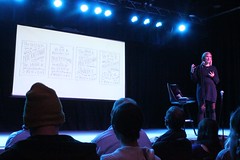 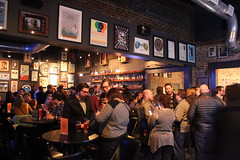 On Wednesday, I headed up to the Waiting Room in Benson to hear Jessica Hische — letterer, illustrator, and drop cap specialist — give a talk about her creative process. The event was held by AIGA Nebraska and the venue was packed wall-to-wall with young hipsters, and I was reminded both how rarely I get out and rub elbows with creative types and just how many other graphic designers there are out there (especially ones willing to drive through snow to get to an event like this).

Ms. Hische also had a great presentation, dropping a new names of celebrities she’s bumped into and high-profile clients she’s worked for before going into her creative process. She had plenty of tips about using Adobe Illustrator, which is how she produces her finished work, as well as the research and thumbnail sketching she goes through to get there. “You have to enjoy the journey,” she said. It gave me some thoughts about what I could do with my own work, and I felt encouraged to try a bit harder to attend the next Nerdbraska event — a local meetup for designers — just to be around more creative types again and perhaps learn through osmosis. 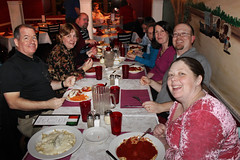 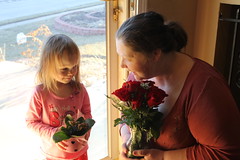 The Mrs. and I just finished off another lovely Valentine’s holiday. The romantic fun started on Tuesday last week when we and a handful of other happy couples from Twin Valley Church assembled at Malara’s Italian Restaurant (at my suggestion) for dinner together. We’d discovered this little place a few years ago, and it was a delight to share it with our friends from church and enjoy some homemade pasta together.

I went on a shopping trip or two during the week and assembled a Valentine’s gift basket for Vivian (with an illustrated card, of course) and a bouquet of red roses to surprise her with when I returned home from work on Friday. I even got a small “love bug” pot of flowers for my littlest Valentine, Hannah. 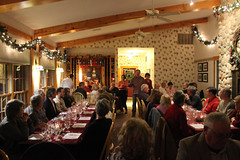 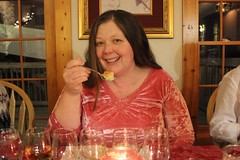 On Valentine’s Day, Hannah and Aaron brought a couple Valentine gifts to the grandparents, which included a handmade card with their footprints turned into painted flower petals.

Then Grammy and Pop-Pop came to watch the kids as Vivian and I drove down to Raymond, Nebraska to attend “a chocolate affair winemaker dinner” at James Arthur Vineyards. Vivian had learned about this romantic five-course dinner with wine pairings a year ago, so I made a note to sign us up as early as we had the opportunity (which meant calling the vineyard in January to reserve a spot before the event had even been announced!) It was a tasty affair, to say the least, with Roasted Cauliflower Soup, Chicken Pecan Salad, a roast beef on a baguette, a bacon-wrapped filet, and a chocolatey dessert (including a tuxedoed strawberry), each with its own unique wine pairing. We left feeling quite satisfied and ready to come back again next summer perhaps for some live music or a murder mystery.

Happy Valentine’s Day, everyone! I hope you were able to enjoy it with someone you love. 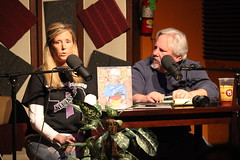 We got another fresh batch of snow on Wednesday morning, which made for a slow, slippery drive to work. It hadn’t been cleaned up entirely by evening, and I nearly got stuck on a side street on my way to see Tom Becka’s second live show at the Pizza Shoppe.

Among the topics of the day, which included complaining about the snow, was a bill to legalize medicinal marijuana before the legislature. Tom’s special guest of the evening was Shelly Gillen, whose son has a disabling disease that causes a couple dozen seizures a day. She wants to be able to treat him with hemp oil and is trying to get a law passed so she can treat her son with it legally in Nebraska. The primary roadblock seems to be fear that it will lead to recreational use to marijuana, as doctors in other states seem to be able to write a prescription for it for just about any reason at all. 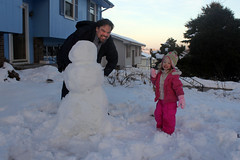 We had a sudden warmth for the rest of the week, with temperatures shooting to the mid-50s, which made for perfect snowman-building weather. Vivian took Hannah outside Friday afternoon to try to roll together a snowman or two in our front yard, but she seemed a bit more interested in eating the snow rather than building anything fun with it.

One of our friends seemed to be in a snowman-building mood as well. Vivian went out to check the recycling bin when she was greeted with a rather creepy visitor standing behind my Ford Taurus. I guess we were asking for it when we left the garage door open a bit too long. 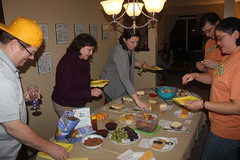 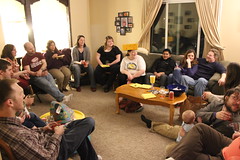 On Saturday night, we hosted our fourth bi-annual Cheese Party. We hosted our biggest crowd yet as a couple dozen friends stopped by to sample wine and cheese with us for an evening that was almost classy. Our defending champion, Mark, retained his crown and narrowly won with his Baltic Porter Bella Vitano. His prize was a set of cheese knives that handles that somewhat resemble swiss cheese. Merinda took home a set of decorative wine-stoppers for her 2014 Australian Moscato, and Ole won the prize for Cheesiest Joke with the one about a lady praying for groceries on her porch.

It was a great evening with a diverse group of friends, and I’m always amazed at how we can have a great time together with nothing more than some wine, cheese, and a few jokes. 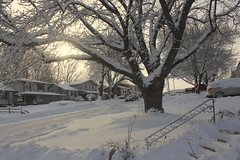 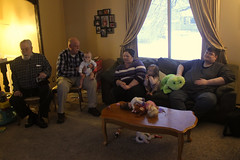 There were really only two big events that happened in Omaha over the weekend — our first legitimate snowstorm of the season and the Super Bowl. That meant getting some quality time indoors with the kids, baking cookies with Hannah and just snuggling with a sleepy Aaron. We woke up on Sunday to a winter wonderland, with plenty of the white stuff to shovel on the driveway and just about everything in town cancelled for the day — church services among them.

What wasn’t cancelled, of course, was the Super Bowl. We got our Super Nachos ready for the Four Grandparents and Uncle Jonny to munch on when the came over, and then we gathered around the TV to watch along with the rest of America as the Seahawks blew a perfectly good victory from the one-yard line. The legendary ads seemed less Super this time around, with dead kids and insipid puppies being among the highlights. Hannah stayed up for most of the game before falling asleep in mom’s lap, and Vivian discovered NBC is bringing Heroes back for a mini-series. That made her night.

On social media, several people made noise about how they’re not watching the Super Bowl. And honestly, I don’t follow (or care) about pro sports at all. The whole point was to have an excuse to sit with family, eat junk food, and make fun of Katy Perry’s back-up sharks, and I think we accomplished that goal in spades.