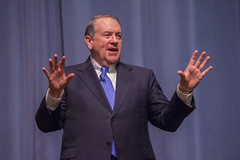 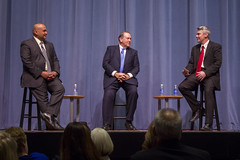 Christmas is coming soon, and that includes such things as our first legitimate snowfall and hanging ornaments on the tree.

It also means a few more presidential candidates wandering through Iowa before Christmas. One of these was Mike Huckabee, who dropped by Iowa Western for a chat with Mark Christian of the Global Faith Institute and Scott Voorhees from KFAB. It was a 90-minute chat revolving mostly around terrorism and religious freedom, though there were questions from the audience on a wide variety of topics. The governor left almost immediately when the event concluded, which left only a few seconds for handshakes before the left the stage (meaning no obligatory selfies with schlubs like me). 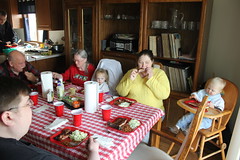 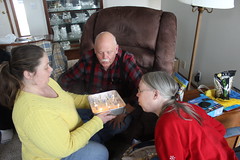 December is also when my mom and dad have their birthdays (the eighth and tenth, respectively), so we had a joint party at their house on Saturday. My dad made ribs for all of us, and my mom made the cake, which Vivian lit up with candles for both of them to blow out simultaneously (something they’ve never done before, strangely enough). Both my brothers were there for the occasion, and my dad showed us a bunch of old photos of our ancestors going back generations all the way to Sweden in a presentation he’d put together. He also had some “stereo” pictures he’d taken of us three boys as kids, but his viewers didn’t cooperate for very long. Among the presents my parents got were a new Roku we bought for the both of them. Now that they have Internet at the house, I was able to rig up Netflix to stream on their TV for the first time.

We had a potluck luncheon at church on Sunday, and singing from all three West girls, but the kids both unexpectedly sick and had to stay home.