Christmas is coming fast, with weather that’s so up-and-down that we’ve had days of lovely sunshine at the park followed by weekends full of rain. Yes, rain. In December. (At least we don’t have to shovel it.) 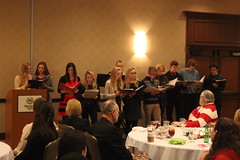 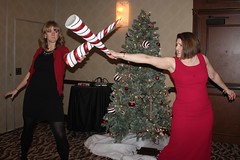 One of the latest Christmas traditions for the Johnson Family has been the Pope Paul VI Institute Christmas Party. My current employer has been the only one so far to have a legit Christmas party every year, always at some hotel with catered food among other things. What’s also nice is our mix of co-workers who can actually have fun with one another outside the office as demonstrated by a couple of our physicians’ creative uses of peppermint cones. The choir from a local Catholic High School came to sing a few Christmas carols for us over dinner, and Vivian and I both got the chance to catch up with co-workers and their spouses, who we usually only see once a year. Plenty of photos were also snapped, of course. 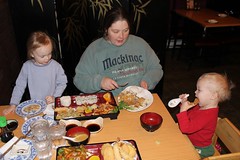 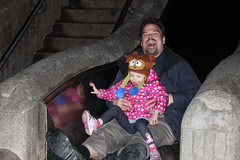 Then on Tuesday, we had an Unexpected Sushi Night out with the kids. I’d bought a Groupon to Matsu Sushi back in August, hoping to use it while downtown with the kids, but they were unexpectedly closed on Sunday. That meant we had to use our Groupon before it expired, so we sat down for some bento boxes and tonkatsu pork for Hannah and Aaron. I was very impressed how Aaron dug right into his dinner and even tried a maki roll, while Hannah managed her chopsticks like a champ.

I’d hoped for a lovely walk by the river to look at Christmas lights, but the kids seemed more interested in slides and a playground frog instead. That was fine, but then it started to rain again, which became a downpour that sent us a home a little early.

Christmas is just around the corner!