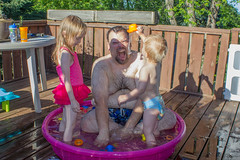 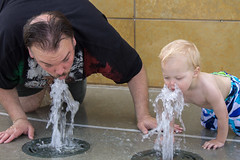 Summer’s almost here, so last week when the kids decided to climb into Aaron’s water table to use it as a swimming pool, I broke down and hauled up their pink wading pool for some quality splash time on the deck. With temperatures in the mid-to-upper-80s, even I found myself climbing in with them to get cooled off a bit. The fountains are also on again down at Stinson Park, which naturally makes for a nice way to go down and cool off with the kids during a lunch break at work (between swing times). Just remember to bring a towel! 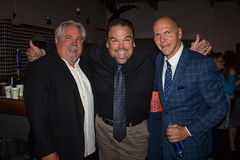 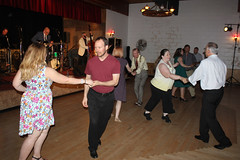 On Friday night, Vivian and I had a special evening at Jitterbugs Night Out, which featured the return of the Prairie Cats, who last performed at the Ozone four-and-a-half years ago. The band is apparently back together and will be performing regularly again, which is great new for swing dancers all across the metro area. We had a large number of attendees, including Jessica, who got to have a birthday jam and a tattoo courtesy of Dan Wondra. Lisa was also on hand with her pink cowboy hat, which Jeff Koterba got to wear once again.

The most conspicuous of the guests, however, was KPTM’s Tom Becka, who’s a friend of Jeff and wanted to hear him perform again. It’s the first time I’d bumped into him since the Iowa Primary ended, so I told him I’d try getting him a new Facebook profile picture. (I did get one for myself with both Tom and Big Daddy K.) 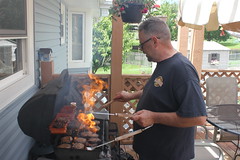 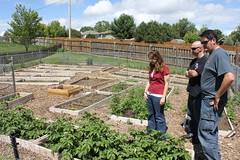 On Saturday, we dropped by Jessica’s parents’ house for a barbecue birthday lunch with her and a bunch of our friends. It was going to be held at Elmwood Park, but it got moved in anticipation of a storm that never materialized. Jessica showed us her parents’ gigantic garden as her dad grilled burgers and hot dogs, and then she even shared with us a bottle of 16-year Aberdour that Mark was nice enough to give her. Jessica’s roommate Kate was celebrating her birthday as well, and a bunch of our mutual children got to have fun playing with one another as the grown-ups snapped goofy selfies of one another. 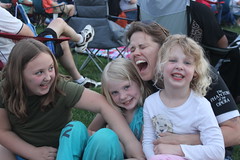 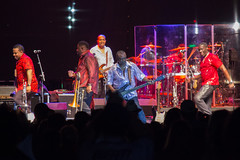 On Sunday evening, we took the kids down to Rivers’ Edge Park for the fourth annual opening concert at Loessfest. We got a couple beach balls to keep the kids occupied (replacing the one Hannah lost three years ago) as the brutally hot sun beat down on us, and we also stayed fed and hydrated under an umbrella as the crowd slowly gathered for the show. A few friends of ours joined us on the blanket, and I bumped into a few more around the park. I took Hannah and Aaron up to the bridge before Council Bluffs Mayor Matt Walsh and his special friend kicked things off. This year’s opening act was the Atlanta Rhythm Section, a southern rock band that seemed to be 90% guitar riffs, which didn’t impress me all that much.

The main event was Kool & the Gang, and they managed to put on a remarkable show with their catalog of R&B, soul, funk and disco hits (finished off, of course, with Celebration). Front men Shawn McQuiller and Lavell Evans engaged the crowd from the very beginning, but the whole group had a terrific amount of energy. Dennis Thomas actually did a cartwheel on stage before picking up his trombone. I was surprised that the Bell Brothers stayed toward the back and out of the spotlight until near the end, when Kool himself got to have a guitar solo.

I was particularly impressed with our own kids, however, who stayed for the whole concert playing ball with their new friends even after I asked if they wanted to go home early. It was a great night, and I’m looking forward to doing it again in a month when we see Kenny Loggins at Memorial Park. 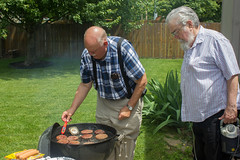 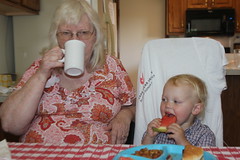 We finished off the fun, busy weekend at my parents’ house on Memorial Day, where I mowed the lawn and then dad grilled up burgers and hot dogs for the family. Both my brothers were in attendance, as were all four grandparents. We all got to eat together and spend some time outside with the kids before a chain of light showers rolled through the metro area.

Then on Tuesday, Aaron got his first haircut, He’s looking more like a little man every day.