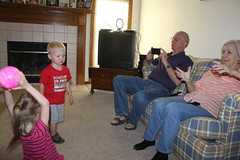 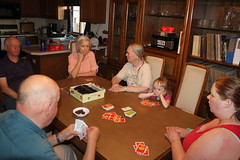 Summer’s here again, as temperature breaks into the upper-nineties and everyone starts looking for ways to beat the heat. For the Johnson Kids, that often means more time running through the fountains of Stinson Park or maybe a Splash Pad. More on that in a second.

My Aunt Nancy and Uncle Andy are taking a trip across the United States visiting family, so last week they dropped by to stay with my folks for a few days. They checked out Boys Town, Runza, and even a firing range. Vivian and I brought the kids by after dinner on Wednesday to say hello and then play a couple rounds of Apples to Apples together. 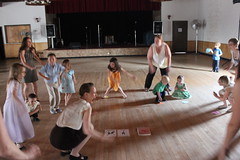 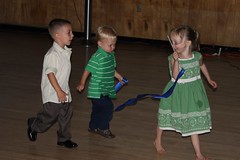 On Friday night, Vivian and I took the kids to the Eagles’ Lodge for the Omaha Jitterbugs’ “Mom Prom,” a fun event designed for little ones with an interest in dancing. Lindsey picked out a few giant dance cards with basic dance steps printed on them, and by putting four of them randomly down on the floor, she created a fairly simple dance pattern for everyone to follow. The kids were all around Hannah and Aaron’s age, and they followed along as best as you could expect of a handful of four year olds. Once the cake came out, however, all bets were off as the kids began to run about on a sugar high with percussion instruments only adding to the chaos, but both of our kids had a great time.

Oh, did I mention that there was NO ELECTRICITY? Yes, there was apparently some kind of “underground vault fire” west of 24th and Harney Streets that blacked out the whole area for the entire evening. We still had a great event, however. Billy got a battery backup for the speakers so we could have music, the sunlight through the windows was more than enough for us to see, and the building even stayed relatively cool for an hour or two without air conditioning. Good job, guys! 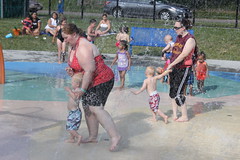 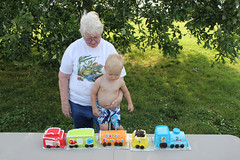 On Friday, our little boy Aaron turned two years old! I made him waffles for breakfast, and he got to open a few presents at home in the morning. Then in the afternoon, we took him to Morton Park for some quality time in the splash pad. It was pushing 97 degrees outside, so getting cold and wet for most of the afternoon was more than welcome. We invited a handful of Aaron’s little friends along for the day, as well as all four grandparents, of course. After getting soaked on the splash pad for an hour or two, we had some hot dogs together followed by an adorable train cake courtesy of Grammy — complete with fondant renderings of Hannah, Aaron, and the cast of Sesame Street.

it’s hard to believe my little boy is two years old now. They grow up so fast, don’t they? 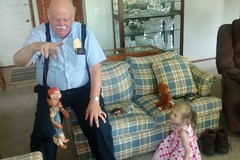 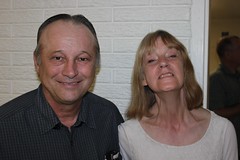 On Sunday, I took Hannah to Grandma and Grandpa Johnson’s house for quality time painting and playing with some of my dad’s old puppets. I also helped Grandpa with a project collecting old family photos and stories and assembling them in a page layout program.

Then that evening, Brazilian missionaries Al and Nadine Pierschbacher came to visit Twin Valley Church. They showed us some slides of their mission work at the New Hope Bible Baptist Church in Fortaleza. Then afterward we had some tasty tri-tip steak for dinner, which I assumed was cooked in the churrasco style. Bom apetite!