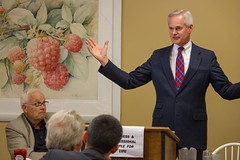 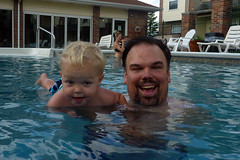 Summer is officially here, and we’ve had a long, fun week celebrating Independence Day, among other things. On Wednesday last week, I got to meet Lt. Gov. Mike Foley at a luncheon as he gave a talk about current issues in the courts and the legislature. I’d bumped into him briefly at work and at a fish fry, and I even saw him once when Obama was in town), but I never got to hear him actually speak before, and I was impressed with how thoroughly knowledgeable he was on the issues.

Then that evening, we had dinner with our friends Jenny and Kody and made use of their apartment’s swimming pool. It was Aaron’s first pool experience, and he seemed quite ready to take off on his own. If only we had a pair of water wings handy. 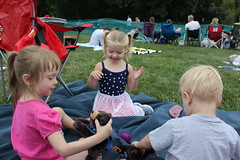 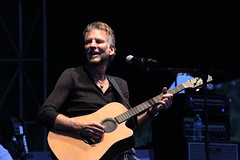 On Friday, we met up with Lexi and her kids for a little quality time at the All-Play Splash Park. The weather was a fairly cool 72 degrees, and the water was even colder, but that didn’t keep us all from running through the sprinklers like little kids for a couple hours before lunchtime. Our kids had so much fun that they both actually took a long nap in the afternoon.

That evening, we took the whole family down to Memorial Park to see Kenny Loggins cut footloose for around 70,000 people. A couple local bands kicked things off, along with KFAB’s Scott Voorhees, before Kenny Loggins rode into the Danger Zone. There must have been technical issues during the performance, because Loggins continually called to people off stage and had someone change his battery pack in-between songs. He also saved his most popular songs (from the 80s movies he’s best known for) for the very end, playing through Danger Zone and Footloose while Vivian was in the bathroom with Hannah.

Of course, Hannah and Aaron were probably unaware that a concert was even going on as they played happily with their bears, chased bubbles with little Delana, and abused our friend Brandon. There were also fireworks at the end, prompting plenty of “Oohs” and “Aahs” from our kids before calling it a night. 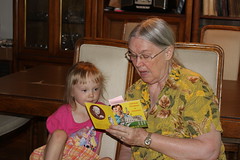 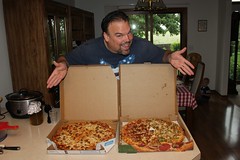 Saturday was a relaxing day, as our Lantern Fest got postponed due to a day full of rain. I took the kids to my folks’ house for brunch and watched a truly terrible movie called Roller Gator with both of my brothers. Then that evening, we embarked on a pizza challenge dreamed up by Uncle Jonny — we visited two pizza shops gave them each a $20 bill, and told them both “Surprise me.” I think Marco’s did the best, with a half-and-half combo and a fancy crust, while Domino’s gave us a meat pizza with a somewhat soggy Brooklyn crust. It was a fun (and tasty) contest nonetheless, and both kids got quality time with the grandparents before and afterward.

Later on, we got a bit of a scare as Aaron woke up at eleven gasping for air and starting to turn blue. Vivian took him to the hospital, where he was diagnosed with croup, coughing up some phlegm, and got some medication that made him crazy hyper for a couple days. 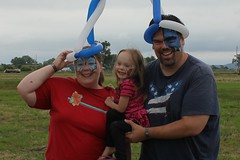 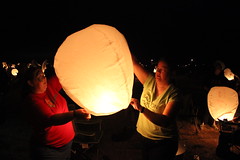 On Sunday, we took Hannah down to the Raceway of the Midlands for a belated Lantern Fest. I’d bought the tickets well in advance as paper lanterns had been made illegal in Nebraska and I didn’t know if we’d have the chance to experience such a thing again anytime soon. We had a great deal of fun even before it got dark getting some balloons made up (by our friend Jen), having our faces painted, and trying out the fireman’s obstacle course. We shared our fire pit with a new friends and made some s’mores over a few logs as the sun went down.

Local Guitar Guy (who also appeared at Kody’s birthday party) played a few songs as we decorated our lanterns and got them ready set aloft. It was harder than I expected — the dampness made the lanterns hard to ignite, and the occasional breeze made it easy for the lantern to blow around and catch fire before taking off. Vivian and I did get both our lanterns airborne, though, and they joined hundreds of others as they congregated in the sky together. Then we celebrated with a new more fireworks at the end of the night before heading on home. 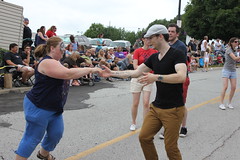 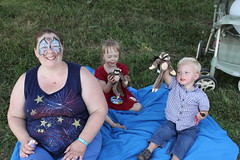 On Independence Day, we dropped by Ralston for their annual Fourth of July parade. We nabbed a patch of green on a hill that gave us a front-seat for most of the parade, which was nice since we hadn’t arrived nearly as early as we should have. There were the usual assortment of politicians on hand: Omaha’s Mayor, Nebraska’s Governor, and a very lively band of young folks marching with Don Bacon. There were also clowns, tiny cars, rollergirls, and Star Wars cos-players.

The Omaha Jitterbugs were also there to provide a dance for Vivian near the end of the parade. One of the nice folks next to us bought tiny slingshot monkeys for all the kids on hand, which was nice (and kept Hannah and Aaron occupied all the way back to the car). We also sat next to some other nice folks who I hope find our blog and the picture I took for them. 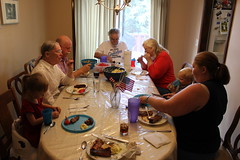 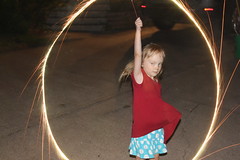 That evening, we celebrated the rest of the fourth with family, food, and fireworks at home. Jack and Donna brought ribs and a lovely American Torte, and I made some of my cowboy caviar and potato salad for a patriotic dinner together. Then we had some fun setting off a handful of fireworks from the end of our driveway when it got dark. Vivian had bought the usual array of fountains, artillery shells, and Roman candles particularly playing with sparklers and swords. Aaron seemed more interested in playing with Grammy, but Hannah got a real kick out of the sparklers. Donna and Vivian also got to have a sword fight before we called it a night.