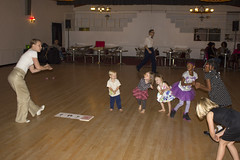 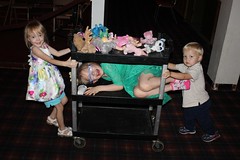 On Friday night, the Omaha Jitterbugs had another “family night” before Jitterbugs Night Out. Vivian and I were scheduled to set up anyway, so it only made sense to bring along Hannah and Aaron for another night of itty bitty dance instruction, courtesy of Lindsey and company. Both Hannah and Aaron had fun running around with a handful of other kids, following along with some basic dance steps, and also making good use of a stray cart.

Aaron was even bold enough to step up to the beginning lessons with the grown-ups when it was time for the “real” dance to start, but he also got to help Mommy at the front desk (when Edith Ann couldn’t be there herself). 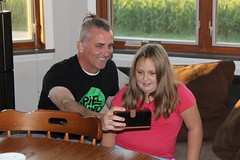 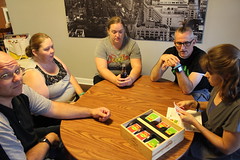 On Saturday morning, I broke out some tools and installed an early birthday present for myself: a Rachio Smart WiFi Sprinkler Controller! It seems like it rains every time I schedule our lawn sprinklers to run, so now I have a controller that can access weather reports via wifi and issue a rain delay automatically so this won’t happen again. Smart!

Then that evening, we took the kids down to Kate’s for another Epic Game Night of Awesomeness. Eric brought his smart phone to add goofy features to a few of our faces, and then we had snacks and played a round of Apples to Apples as the kids wreaked havoc in the next room. (I also had some Potato Dreams, which I still can’t quite explain.) 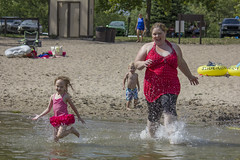 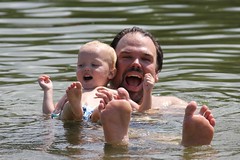 Then on Sunday, we took the kids down to the Louisville Lake for the afternoon. Yes, summer is quickly switching over to fall, but it was still a toasty 88 degrees or so, and the cold water was more than welcoming. The kids spent some quality time splashing and soaking in the water, as well as burying themselves in the sand and playing with someone else’s sand toys. We topped the day off with some ice cream before heading home.

Next stop: my birthday! (Spoiler alert: I get older and have pizza.)