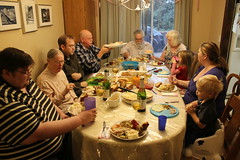 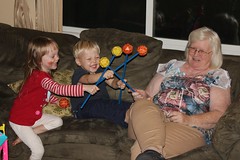 We kicked off another holiday season at the Johnson house over the weekend as we celebrated Thanksgiving with the rest of the country. Jack walked Vivian through all the steps of preparing the Turkey, and we had all four grandparents and my two brothers over to share in Thanksgiving dinner (and pie).

We had the Macy’s Day Parade on the TV downstairs along with parts of the streaming MST3K Marathon, but the latter went mostly unnoticed throughout the afternoon. Hannah learned to be a delightful little hostess serving up ham roll-ups, and she also got play with the fort-making materials she got for her birthday (though they quickly became goofy generic toys instead). 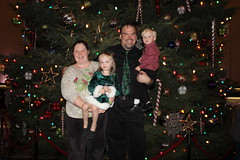 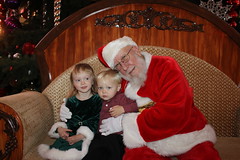 We spent Friday night the next day at Union Station for their tree-lighting ceremony. There was a decidedly smaller crowd this year since many people were busy watching the Huskers get humiliated by Iowa. That meant no line to see Santa and plenty of time to make cookies and explore the museum. Hannah and Aaron got to run through the train cars and play with a few snowmen, and a capella group called the Bathtub Dogs sang a few Christmas songs before Santa and Mayor Stothert lit the tree around seven o’clock.

We hung around afterward to get our annual Christmas photo taken. We also checked out an exhibit on prohibition, and Hannah and Aaron got to play dress-up with some revolutionary garb before we headed on home. 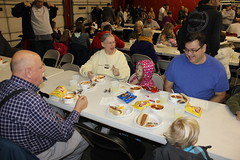 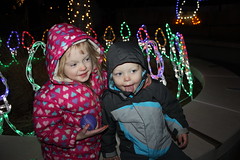 On Saturday, I spent the afternoon decking out our house in Christmas lights while the weather was nice and accommodating. Then on Saturday night, Vivian had a “Norwex Party” at our house for some reason. I rescued the kids from that by taking them to downtown Papillion for some of their winter festivities. Mom and dad our friend Phil joined us for hot dogs and chili at the fire station for dinner, and then Phil and I took the kids down to the park, which was dressed in Christmas lights for the season.

They had plenty of festivities for the Winter Wonderland event, which included live music from the Plucking Nuts outside the middle school and some frightening costumed characters wandering about. They also had visits with Santa and Carriage Rides available, but the lines for those were so ridiculously long that we just headed home instead to put the kids to bed and then watch some Mystery Science Theater (Monster a Go-Go — don’t bother, not worth it).