If you know me, you know I love food. There’s something about good food that brings people together, and some of my favorite memories are spent with good food enjoyed with family and friends. Here are my top ten favorite dishes from 2016 (in no particular order). 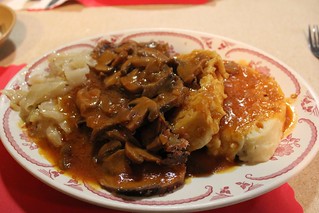 10. The last meal at the Bohemian Cafe

The Bohemian Cafe, a mainstay in Omaha’s historic Czech neighborhood, closed its doors this year. It was the first place Vivian came to eat when in Omaha (with our late friend Keith, who also passed away this year). It was also where I bumped into Warren Buffett when Vivian took me there for my birthday in 2011. The food was from another era. This particular dish was their roast Beef with burgundy gravy and mushrooms, sweetsauer cabbage, and dumplings (which were especially memorable). This place was a gem and it will be missed. 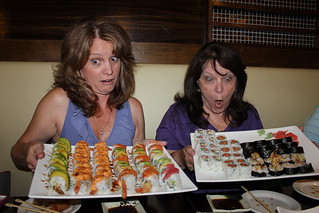 We went to this place twice in 2016 to get our fill of sushi, and we also took Vivian’s aunt and cousin there when they came to visit (pictured above). The sushi is very good and the menu is fairly extensive. You can even get sashimi at certain time, but the fact that you can have as much as you like makes this place particularly special. 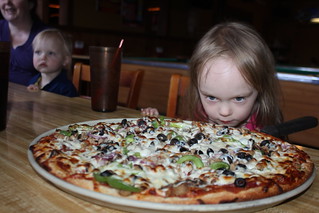 My favorite pizza place in Nebraska or anywhere else nearby. Whenever we stop by in Lincoln, whether for a freelance gig or to visit the state capitol, we try to make a trip to Big Sal’s for lunch. I always get a large combo and also try to use a Groupon whenever it’s available (and it usually is). 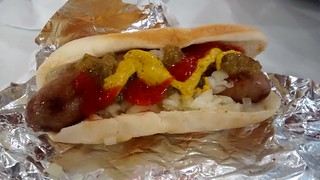 7. Brats and hot dogs at the Costco food court

One of the highlights of shopping at Costco with the family is being able to stop by the food court for one of their 1/4 lb. hot dogs for lunch. You can get them with a drink for just $1.50, which is likely a loss-leader for Costco. The best part, however, is just being able to go out to lunch with the family after shopping (and nibbling on samples, of course). 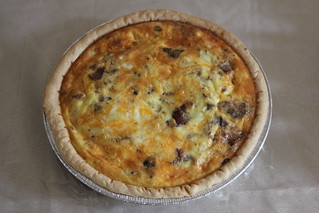 This year, I learned how to make some simple quiche for both Mother’s Day and Christmas. Preparing these things was remarkably simple. I buy pre-made frozen pie crusts and then fill them with cooked bacon and sausage, cheese, onions, peppers, spinach, or whatever. Then I pour an egg-and-cream mixture over them and bake for 15 minutes at 375° F. It’s especially nice to prepare these a day ahead of time so they’re easy to throw in the oven when it’s almost time to eat. 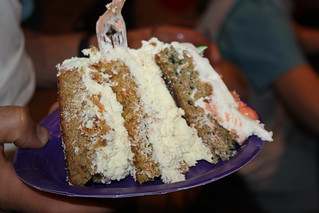 For Dennis’ birthday this year, our mutual friend Jen made this super-rich, super-dense, multi-layer carrot cake with cream cheese frosting. You could hear it landing on my plate with a “thud” and it was the sort of thing you savor with every bite. 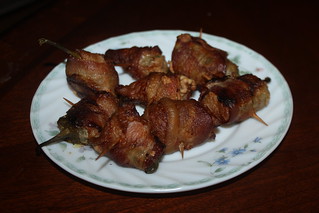 One of Vivian’s specialties are bacon-wrapped Jalapeño poppers stuffed with a cream cheese and onion soup mixture. She usually tried to get all the seed out ahead of time so they’re not too spicy, but I don’t mind them hot. It just means it take a little longer to enjoy them all. (I would recommend removing the toothpicks, however.) 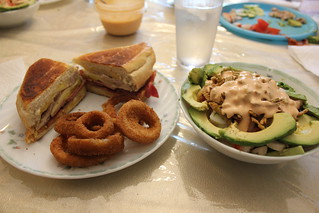 I first learned about the cubano sandwich while watching the 2014 Jon Favreau film Chef via Netflix. It’s made with ham, roasted pork, Swiss cheese, pickles, mustard, and sometimes salami on bread put through a panini press, and it’s quite delicious. For Father’s Day, I got to have one with onion rings and a seafood salad that was quite generous with crab and avocado. Best Father’s Day lunch ever! 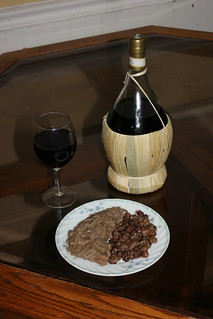 2. Liver with fava beans and a nice chianti

I must be unusual in that I love liver and onions. Somehow, the iron-rich dish tastes good and feels good, particularly served hot and smothered in a sauce made with butter and red wine. The fava beans added a nice, meaty side, and a good red wine, in this case a Chianti, is a must. 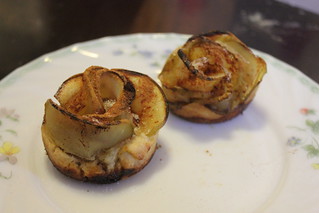 Vivian made these beautiful little things for me for breakfast on Valentine’s Day this year. What can I say? They were nearly too beautiful to eat, but I made sure I got a nice picture of them first, of course.