We’ve had a fairly fun week with the kids, despite the spring weather going from gorgeous to non-stop wind, cold, and rain at a few fairly inconvenient times. 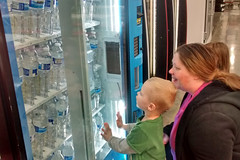 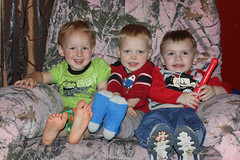 On Monday, Vivian dropped by a garage sale to pick up a new car for the kids along with a miniature drum set. We dropped by Costco for a shopping trip and lunch with Grammy on Thursday — just one last time before BSF is over. Hannah and Aaron also got to have their first experience with a water bottle vending machine, which they found fascinating.

Then on Friday, Aaron’s friend August turned three, so we dropped by for an extended birthday party with a rowdy crew of little ones that concluded with a picnic on the floor. I also got the boys’ annual picture together, which will make for a fun montage if we keep this up for the next 15 years or so. 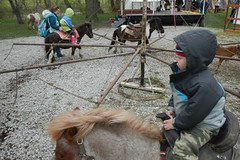 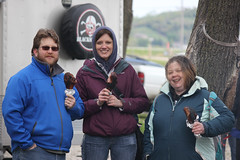 On Saturday, we took the kids to their first Renaissance Festival (apparently unaffiliated with that other one) up near Waterloo with Jenny and Kody. Rain was forecast for the whole weekend, but it stayed away just long enough for us to have about two hours of fun in the wind and cold. The kids got a pony ride, looked at a few of the toy weapons and other things for sale, and then we got to have a few turkey legs. The cast of the “Rain Fest” characters were still in good spirits, including the Fairy Queen who entertained the kids shortly before we called it a day (right after missing a Joust).

We retreated to Village Inn to warm up with hot chocolate and pie, and we grabbed a Chocolate Truffle pie before calling it a day. 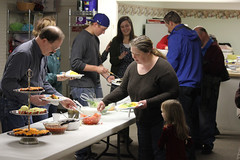 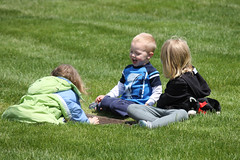 Our church had a Taco Bar on Sunday to help fund Wil Hall’s upcoming trip to Honduras. Our kids got their fill of tacos and nachos, and our friends Phil and Jen even decided to stop by and give us some tips on our upcoming trip to Pella, Iowa. (More on that next update.)

It rained all day Sunday but then became gorgeous for the rest of the week. That naturally meant another trip to the park with Hannah and Aaron, which included a burger picnic, a giant red ball, and discovering the joys of talking into a sewer grate with a new friend. I also rode my bike to work a couple times, which was a sheer joy after being cooped up throughout most of March and April.