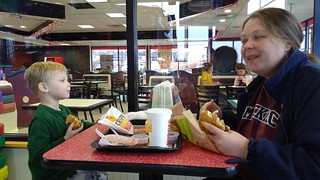 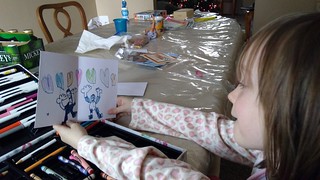 I decided to take off from work the few days between Christmas and New Year’s, which let me recover a bit after Christmas and get some extra time with the kids. We did mundane things like get both of our cars an oil change, and we got the kids some exercise running around at the Kroc Center and at Burger King over lunch. I also got Hannah to decorate a belated Christmas card for Uncle Nathan so I could send him a belated Christmas gift (namely CASH). 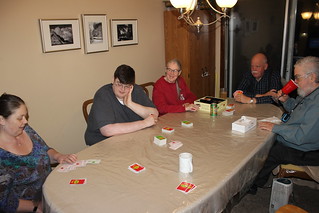 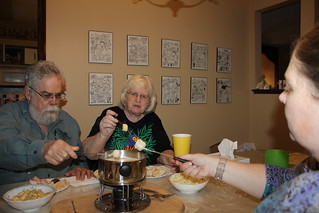 We got some more quality time with family and food on New Year’s Eve. My folks came over with Uncle Jonny to join us for a round of Apples to Apples, and then Jack and Donna stayed with us until midnight having some cheese fondue as the last moments of 2018 faded away. Hannah was bound and determined to stay up until midnight with us, and she spent some time drawing pictures with Grammy. She crashed eventually sometime around eleven, but we roused her before midnight came to the Central Time Zone.

I popped open a bottle of sparkling white as we rang in the New Year together before calling it a night. We spent New Year’s Day recovering from the night before, letting Aaron practice the alphabet on my Raspberry Pi and having some of Jack’s spicy black-eyed peas for dinner.

Tomorrow, it’s back to work (and reality) after a lovely, long Christmas break. Bring it on, 2019!