We’ve had a busy, busy week here in Omaha mixing work and fun and family all together — with a little bit of gorgeous weather along with it. 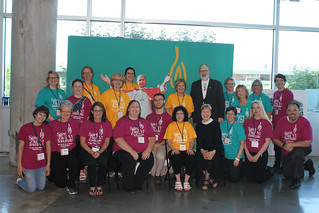 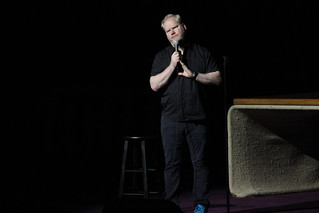 First up was Unite, a huge event held by the Archdiocese of Omaha. The Pope Paul VI Institute, where I work, was one of about a dozen organizations invited to showcase their work to several thousand Catholics who came to participate at the Qwest/CenturyLink/CHI Center in worship, mass, and fun. Our booth was the result of six months of planning, with graphics and banners and eight keynote speakers at our corner of the concourse. I was on hand to take loads of pictures for several hours, so I definitely got my “steps” for the day.

As a reward, Vivian and I got to see a performance by Jim Gaffigan in the afternoon. We’d seen several of Gaffigan’s routines on Netflix previously and were well versed in his food-related humor (specifically Hotpockets). I was also aware he was a Catholic, which was likely part of the reason he was recruited as the “draw” for this event. His set included a few jokes specific to Omaha, including comments on the Runza (and how its name tells you what it gives you). We got seats fairly close tot he front, and I was even able to smuggle in my camera to get a few halfway-decent snapshots for the blog. 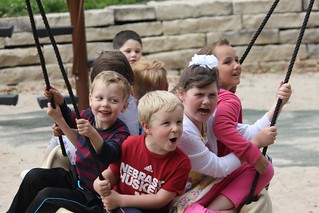 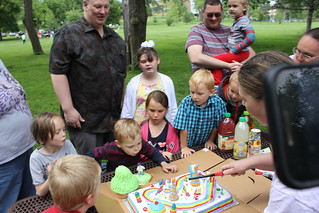 Then on Sunday after church we had a birthday party for Aaron with some friends at Elmwood Park. The weather went from mid-90s to 70 literally overnight, so the weather couldn’t have been more perfect for playing on swings, slides, and sand toys during the afternoon, getting a little exercise before getting sugared up.

A bunch of Aaron’s little friends were able to join us, as were mom and dad and Uncles Nathan and Jonny. Donna and Vivian had prepared a birthday cake decorated with characters from “True,” Aaron’s current favorite show on Netflix, which we cut into around 3:30 (and even lit candles on for a few seconds). Then Aaron got to open a few presents before calling it a day. 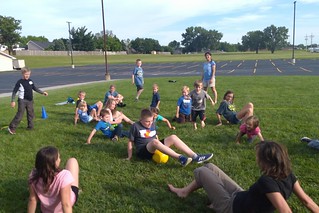 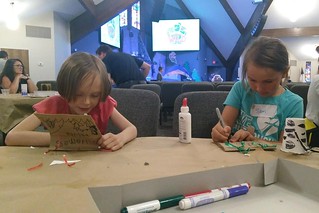 In the meantime, Wildewood Church is having a week-long VBS with the theme “In the Wild.” Because of Aaron’s birthday (and sheer exhaustion) we weren’t able to attend the opening night. We were able to drop in on Monday, which was a lot of fun. They had some outdoor activities and crafts that parents and kids were invited to participate in, as well as crafts and songs with crazy hand motions that felt more like 80s-style aerobics. They also had a bible story and a snack sandwiched in the middle. I wasn’t entirely sure if we’d have the energy to participate with all the other stuff going on this week, but the kids seemed to have a lot of fun, and Vivian and I wound up crawling on the ground on all fours along with them.

This was actually the first VBS I’d actually attended since I was a kid, and I was amazed at the amount of work and energy the volunteers must have put in to pull it off. 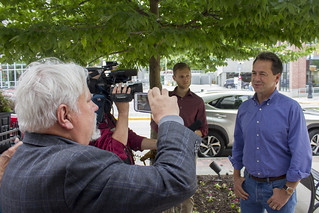 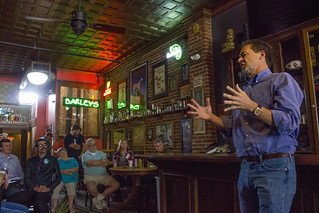 Then on Tuesday I got to meet Steve Bullock, Democrat Presidential Candidate and Governor of Montana, over my lunch break. His meet-and-greet was held at Barley’s in Council Bluffs, of course, which has become the go-to place for Presidential candidates for reasons I can’t quite understand. He spoke briefly with reporters (and Tom Becka) outside on the sidewalk before speaking to a crowd of a couple dozen inside afterward. He hit a bunch of fairly standard Democrat talking points, such as climate change and “women’s health” (AKA abortion), and he emphasized his work as a lawyer with the IBEW union.

The crowd was largely friendly, and I shook his hand afterward telling him that I hoped whoever becomes President in 2020 can help heal the divide in our country. 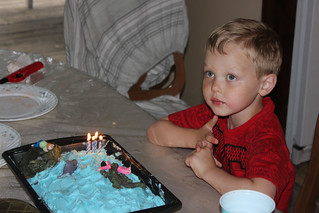 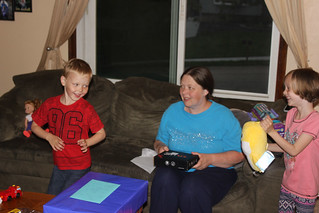 Then that evening we celebrated Aaron’s actual birthday with pizza and presents with the family. I got three large pizzas from Papa Murphy’s for dinner, partly to ensure leftovers for a couple days, and we ate with Pop-Pop, Grandma and Grandpa, and Uncle Jonny. Then Aaron got to open a few more presents, which included a glowing dinosaur nightlight from Uncle Jonny, a soccer ball from grandma, a cornhole game from Grammy, a marble chute construction set, a singing Baby Shark from Hannah, and a periscope from Grandpa (which Hannah immediately seemed to take possession of).

We also had a second cake, this one being decorated inexplicably with Hannah being eaten by an alligator while Aaron looks on with a shark (I still don’t get it).

We’ll have more fun forthcoming this week, and hopefully I’ll have the chance to catch my breath soon. Maybe for Father’s Day.