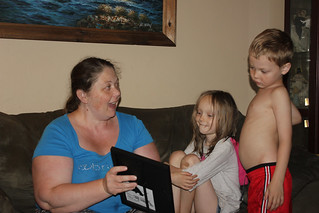 Over the weekend, Vivian and I celebrated twelve years of marriage in the lowest-key anniversary — mostly by staying at home. Aaron and I have been sharing some sniffles for a while, which made both babysitting and going out to celebrate seem impractical for the time being. Instead, Vivian made up some tasty rib-eye steaks and lobster for dinner at home, with clam chowder and scalloped potatoes on the side. It was our kids’ first experience with lobster, but we had corn dogs for them to eat instead (though we did offer them both a bite). Afterward, we went by Dairy Twist again to get some ice cream for dessert, just like we did last week. Then we took a trip back to the scenic St. Columban Retreat Center just to get a close-up look at some deer again before heading home.

Of course, no anniversary would be complete without an Anniversary Comic, so I presented Vivian and the kids with my twelfth one, highlight all the fun we’ve had in the past year since our last anniversary. We also had some gifts for our “silk anniversary.” I had a new silk nightgown for Vivian, and she had some silk ties for me (along with a car charger, chocolate-covered blueberries, and a giant “no” button). 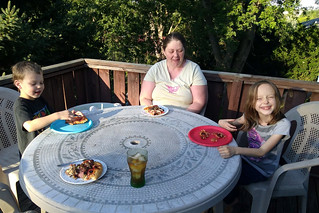 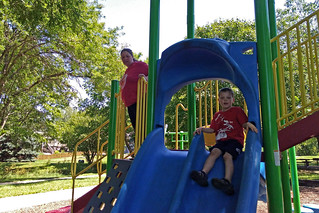 We got to indulge in a few simple pleasures over the next day or two. On Monday, Vivian made some homemade pizza for dinner, the weather was cool enough to warrant a trip out to the deck to eat for the first time this year (but still warm enough for ice cream cookies).

Then on Tuesday, both Aaron and I had medical appointments (for a physical and a Covid test, respectively), and afterward we had burgers and shakes Hickory Hill Park over lunch. The shade was lovely for a lunch-time rendezvous, and I don’t think I’ll ever take for granted being able to watch the kids play on a regular workday.