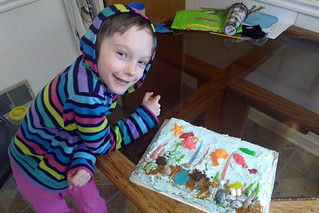 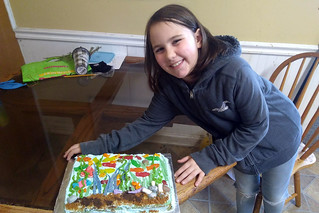 So, it’s still winter, but we’re always finding things to do, both inside and out. For instance, Hannah broke open the geology kit she got for Christmas and has been proudly showing us the rocks she’s dug out of it.

Then on Friday last week, Grammy stopped by to help Hannah and her friend Sammy make and decorate some cakes together. They created a few cupcakes first for practice before putting together some lovely cakes with underwater themes — complete with gummi fish and sea creatures. The girls did all the decorating themselves, and Hannah got to cut herself a little piece afterward — right from the middle of course. 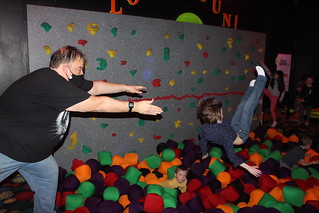 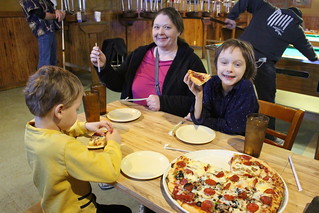 The weekend was full of cold and cloudiness, so we decided to take the kids down to Lincoln for a trip to Lost in Fun — our first time there in about a year and a half. Usually, I have some other business in Lincoln to warrant such a trip, but this time it was entirely just to get out of the house. Hannah got plenty of time in the foam ball pit, climbing on the walls to jump in — or be thrown in by daddy. Aaron discovered the ball cannons and got to explore some of the large “Habitrails” with Hannah, and both kids had a little time on the bouncing pillows as well.

We called it a day after about two and a half hours, and we stopped by Big Sal’s for some pizza for dinner on our way out of town (per tradition). 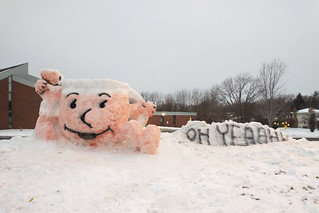 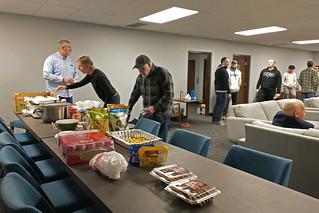 On Sunday evening, I visited Converge Church in west Omaha with my dad for some “Burgers and Batman” with the men’s fellowship group there (fellowship being code for “pigging out”). Someone had been having fun in the snow out front and made a giant “Kool-Aid Man” sculpture, which can be seen quite plainly from 144th street. Inside, the men had brought a couple dozen foil-wrapped “sliders,” and they asked us all to bring along various sides and ingredients to put on them. I got some peanut butter and pickle for mine, along with some guacamole and bacon.

After that, we settled down to watch The Dark Knight Rises, the third installment in he Christopher Nolan Batman trilogy. I’d seen the movie way back in 2012 with Vivian and Hannah at the Boulevard Drive-in Theater in Kansas City, but I wound up missing much of it because Hannah got cranky and unhappy toward the end instead of falling asleep as I’d hoped. I rather enjoyed it the second time around, partly because it was made back when Hollywood had no problem portrays cops as the good guys, particularly when fighting an angry mob of anarchists. 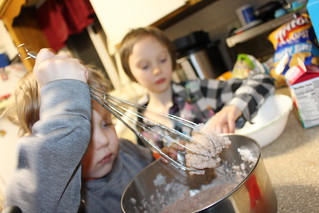 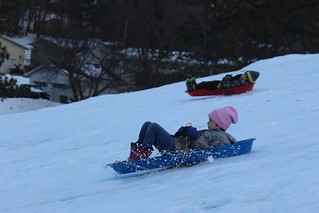 We had a little more fun on Monday, when Aaron got to make some homemade ice cream as part of a school project. That meant mixing up some chocolate and cream in a bowl along with a few cups of actual snow scooped up from our yard. Then we actually gave it a taste, and it wasn’t too bad, though the kids both wanted the “real thing” afterward.

I watched Groundhog Day on groundhog day with Vivian, one of my favorite movies that doesn’t seem to get old after all these years. Then on Wednesday, we took the kids sledding out by Bellevue East once again. The weather was predicted to turn much, much colder, so we enjoyed the above-freezing temperatures for just a bit before calling it a night.