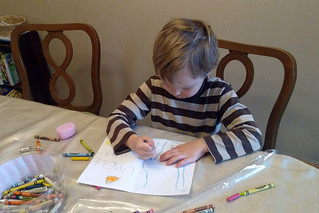 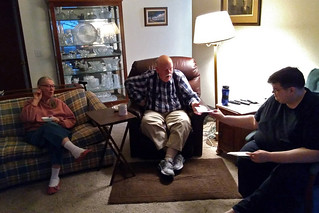 As the world shuts down to deal with the Corona Virus, I spent Wednesday evening breaking quarantine to wish Uncle Jonny a Happy Birthday. The kids each decorated some birthday cards for him, which included such things as watermelon, corn kernels, Mega Man, and a maze. Vivian and I gave Uncle Jonny a gift card for RiffTrax to tide him over during the quarantine. He’s now working from home, and while everything else seems to be cancelled, they’ll be spending a lot of time indoors.

My mom made brownies for us, but we otherwise kept “socially distant.” I’m not sure when such things as walking with the kids to grandpa’s house will become a regular thing again, but I hope it’s soon. 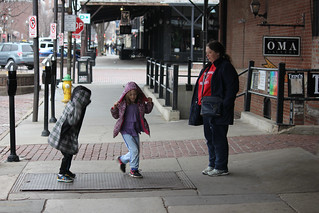 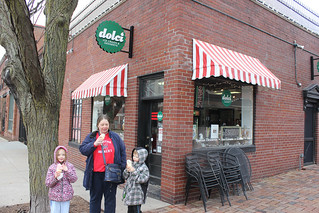 Of course, sheltering in place means more time for spring cleaning, so on Saturday I spent some time clearing out our storage area and setting up some shelving I’d bought at Aldi to help get things organized. I also gave our little apple tree a good pruning with the tips I’d learned from my visit to Ditmar’s a few weeks ago, and I even got a stake in the ground to help straighten it up a bit.

Then on Sunday, we had our virtual church service from Wildewood in our living room while eating some bacon and pancakes (and kale for Harold). We’d gotten a bit stir-crazy by lunchtime and decided to get outside a bit, stopping by McDonald’s for a lunch of double Big Macs before going downtown. We had a nice little walk around the Old Market despite the gray and drizzling weather. The kids seemed to enjoy just running around the nearly vacant streets. We did find that Dolci was still open for business, so we all got some Italian ice cream before heading home.

How are you spending the quarantine? Let us know in the comments below. 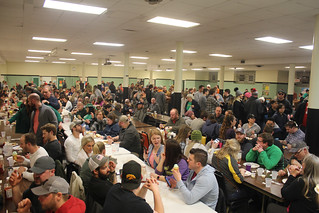 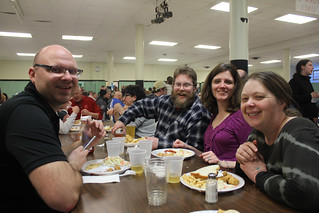 The Lenten season is upon us again, so that means touring some of Omaha’s famous fish fries, in particular the one at Holy Name. It’s is one of the biggest draws in town, attracting such guests as Congressman Don Bacon, as well as our tiny group. The fish is good, and watching it being battered in a custom-made contraption is a show all in itself.

This particular fish fry is baffling as many in the crowd outside — and packing the halls inside — seem more interested in standing around drinking instead of lining up for fish, making it difficult for the rest of us to know where to go. It’s a fun time once you make your way inside, though (and the smell will linger with us for weeks). 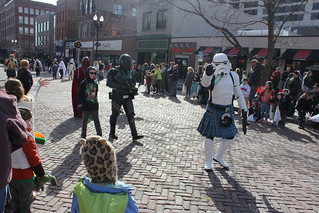 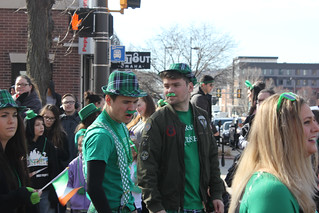 The next day, I went downtown with Hannah to see the St. Patrick’s Day parade. It had been delayed a week due to unexpected snow and nasty weather, and it was about half as long as last year as well. We still saw the standard of parade participants, ranging from politicians to Star Wars characters, to Irish dancers, clowns, and even a Family Reunion of sorts. The weather was just about perfect, with temperatures rising to the fifties, so Hannah and I spent a little extra time watching geese fight along the now tree-less Gene Leahy Mall and looking at some of the flooding along the Missouri River. We even took a few minutes for a daddy/daughter date at Chick-Fil-A before heading on home. 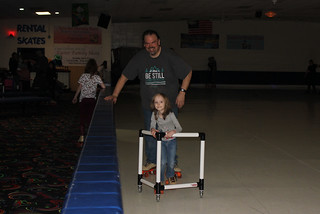 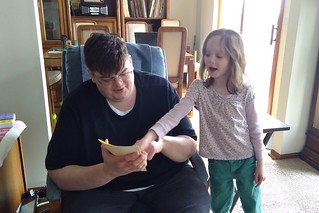 Later that day, we celebrated Uncle Jonny’s birthday with my parents and Uncle Nathan. Jonathan wanted to go roller-skating down at Skate City on Fort Crook, so I brought Hannah along and spent some quality time staggering awkwardly around the rink with her for an hour or two. It was legitimately the first time I’d ever gone roller skating, but it wasn’t nearly as bad as I imagined (particularly after one guy helped tighten my skates). Hannah, much to my surprise, had a grand time skating around the rink using a kind of walker they had on hand for the little ones.

Then that evening we headed back to my parents’ house for some Marco’s Pizza and pumpkin pie for dessert. We finished off the evening watching some family slides with the folks and then playing some Choose Your Words before calling it a night. 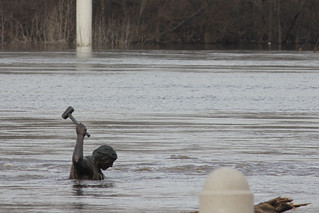 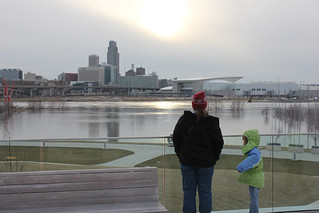 On Sunday, we celebrated St. Patrick’s Day with our traditional dinner of corned beef and cabbage with red potatoes and Irish soda bread, though we also had some special green foods for the kids that we hoped would be more palatable.

Then on Monday we headed down to the waterfront a family to get a look at some of the flooding from the Missouri River. The devastating flood has made national news, but we live and work far enough away from the flooded area that we’ve been largely unaffected. It was daunting to see the statues at Lewis and Clark landing drowning once again (as they did in 2011), as well as the entirety of River’s Edge Park completely underwater, making me wonder about the fate of Loessfest this year.

The kids mostly enjoyed the chance to get outside and run around, and we also saw a number Canadian geese migrating overhead, flying in wave after wave heading north in V formation. The effects of the flood were sobering in the meantime, but I couldn’t be prouder of the response of our friends and neighbors, who are stepping up with volunteers and supplies gathered at nearly every church I can name, including the ones we attend on Sunday and Wednesday night. Nebraska Strong, indeed. 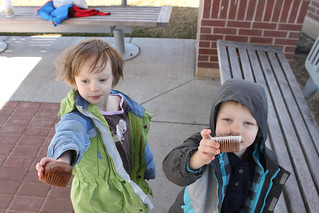 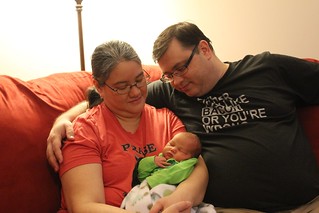 Winter has been having fits and starts, but it looks like we’re on our way to spring. Last Wednesday, Vivian brought the kids to the park along with some cupcakes to share (in lieu of paying $4 each at Jones Bros). After some brief time on the swings (with Raffie), we ran up and down a few hills to burn off the sugar rush before calling it a day.

Then on Friday, we paid a brief visit to Phil and Jen and their new baby Gabriel. This was a long-anticipated miracle for the two of them, and I was quite happy to take a few new family pictures of the happy parents. 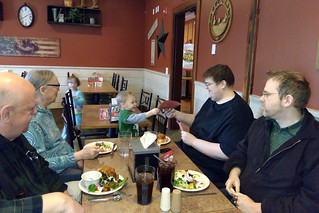 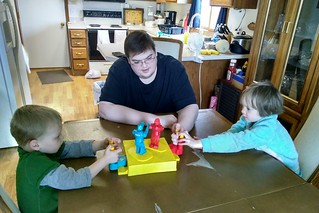 On Saturday, we joined my parents and two brothers to celebrate Jonathan’s birthday at the local Pizza Ranch. Hannah and Aaron each made a birthday card for Uncle Jonny (featuring Mega Man characters), and then we binged on pizza and fried chicken as the kids played horsey around the party room.

Back home we had some “impossible pie” cake and got to play a bit with a prize Jonathan brought home — a classic Rock ‘Em Sock ‘Em Robots game. We also looked at some old family slides and played a couple rounds of Use Your Worlds together, but Hannah was more interested in watching her shadow jump in front of the screen. 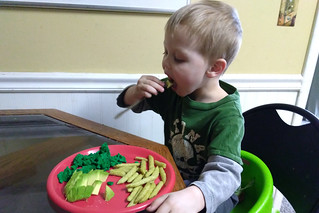 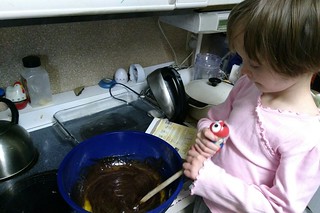 That evening, we gave the kids some green foods for St. Patrick’s Day, and then Vivian made a feast with corned beef, potatoes, cabbage, and Irish soda bread. We also had some Irish cheese, which we ate while watching the classic Disney film, Darby O’Gill and the Little People, which is about as Irish as movie as you could find.

The next day, I got some one-on-one time with Hannah and decided to make some mint chocolate brownies with green icing just for fun. There’s never a bad time for sugar around our house!