We’ve had a few gorgeous days here and there this week, necessitating a trip or two to a park, but mostly it’s been hot and muggy as summer absolutely refuses to make way for fall. Fortunately, our tomatoes have started kicking into high gear, giving us plenty of tasty treats for bruschetta and such. 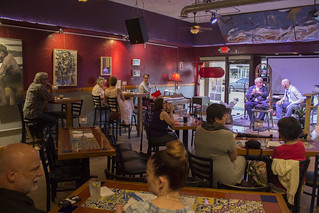 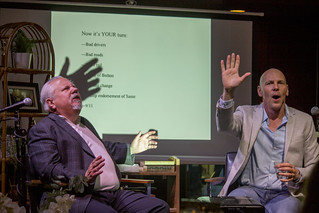 On Wednesday, I spent the evening with Tom Becka and Jeff Koterba in Benson, who were helping to raise a few dollars to renovate the Benson Theater. The theater has been vacant for several decades, but there are some very elaborate plans to bring it back to life, and they’re about half a million dollars shy of meeting their goal.

The event was at the “B Side,” which was once the “PS Collective” connected to the Pizza Shoppe where 88 Improv used to perform (and Tom once “performed” for use amusement years ago). The room was now sealed of from the pizza, but there is now a bar where I got a “figure of speech” to sip as Tom and Jeff introduced themselves and dove headlong into a Facebook argument IRL on stage for us. The title of the event was “Rare Breed,” and asked “are cartoonists and commentators going extinct.” I would certainly say “no,” as the Internet has made it easier for anyone to have a platform to spread their views or cartoons with almost no overhead whatsoever, but it did launch into a long-form discussion on such things as “fake news” and red light cameras, among other things. We also got to try drawing our own editorial cartoons from a list of topics, a la the Kaneko event a few years back, so I tried my hand at a caricature of Ben Sasse.

It was a fun evening, primarily because I always prefer arguing “IRL” as opposed to online, where being snippy and sarcastic often gets you likes when thoughtful discussion gets ignored. 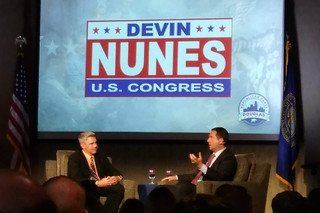 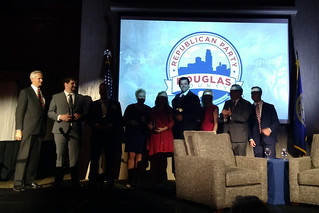 Friday brought along some gorgeous weather, so we took the kids to the park for a lunchtime visit. Then that evening, Vivian and I attended a “Tribute to Patriots” event, where we got to hear from Congressman Devin Nunes of California, emceed by KFAB’s Scott Voorhees. He’s been in the headlines recently for his role in investing Russian collusion, but he had a few other interesting stories about his interactions with President Trump. We saw several familiar faces there, including Don Bacon, Lt. Gov. Foley, and the usual band of GOP volunteers. They had a few awards at the end for the “five that drive,” which included several of them.

It was a lovely evening, though I forgot my memory card, so I couldn’t use my “good camera” to get any pictures. We also had a late dinner, so we wound up crashing at our old Village Inn for chicken pot pie and a french dip sandwich together (and pie, of course) before calling it a night. 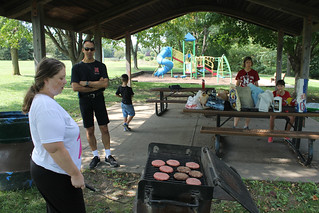 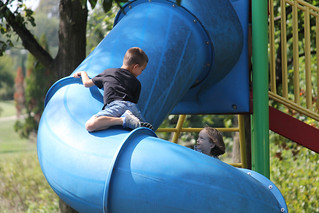 Saturday turned out to be the perfect day for just about everything outside — including a bit more house painting in the morning followed by a picnic lunch at Hickory Hill Park with our friends, the Lenarts. We’d been aiming at having another meetup for a while and managed to land on the perfect day for grilling a few burgers outside while letting the kids play on a new playground together. 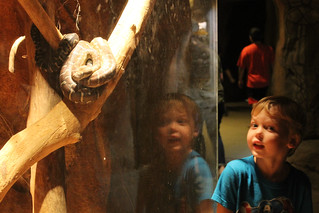 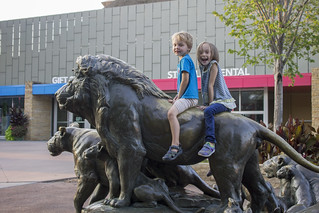 Then that evening, we had another trip to the zoo, courtesy of the Autism Society of Nebraska. We dropped by around six and had a look around the mostly too-dark-to-film “kingdom of the night” beneath the desert dome. We saw an alligator or two in the swamp and some snakes before heading upstairs to the drier part of the dome, where we got a peek at a fox, some mongooses, and some rattlesnakes.

The kids spent plenty of time playing on zoo statuary before we headed to the jungle to hang out for the rest of the evening. The bats were out in full force once again as we looked around upstairs and down, and then we dropped by the Wild Kingdom pavilion to cool off with a dance and a ride in a Humvee before calling it a night. 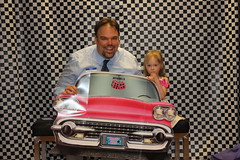 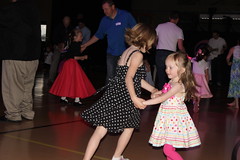 It’s been another fun, busy weekend for us. Hannah and I kicked it off on Friday night by attending a daddy/daughter dance hosted by Calvary Church and the Sarpy YMCA. They put on a very nice event in the theme of a 50s “sock hop,” with a soda fountain, photo booth, and plenty of dancing to classic oldies music (though they The Temptations’ “My Girl” at least four times for some reason — hit the shuffle button, guys). Hannah didn’t seem quite as keen dancing with me as she did dancing either on her own or with another girl named Alyssa, but that was fine — it still burned off the sugar high she got from the chocolate fondue. Lindsey from the Y even got up to lead everyone in Zumba for a bit, which was still a little too organized for Hannah. We both still had a good time, and we finished the evening with a purple and orange flower on her nose. 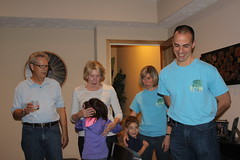 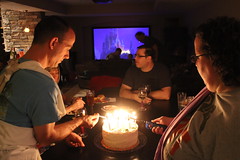 On Saturday, the kids spent some quality time with grandma and grandpa having Chinese food for the first time and watching MST3K (Pumaman). Then that evening, Vivian and I went out to Milliard to surprise Dennis for his 40th birthday at Kara’s parents’ house. The event had the theme of a toga party, which meant lots of Greek-style food with the help of Phil and Jen. Kara’s dad also grilled some burgers after Dennis and the family dropped in for their surprise, and Jen also made a massively dense rainbow carrot cheesecake. Hannah played with Dean’s little girl and bopped little Matthew with a few balloons as the rest of us played some Pictionary before calling it a night. 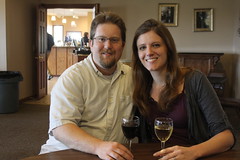 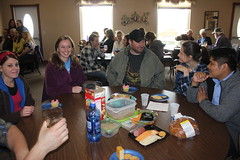 On Sunday, we had a potluck lunch at church and then sent the kids home with Grammy and Pop Pop so we could attend another birthday party for Kody down at Soaring Wings Vineyard in Springfield. Around a dozen of our friends came by to have wine samples and cupcakes as Dan Christian covered some country songs as other people danced. Kody also presented Jenny with a ring, fooling the next table into thinking he’d just proposed. It was unfortunately too gray, cold, and rainy to go outside, which was beautiful, so maybe we’ll come back in the summer when they have a live band (like they did some seven years ago when we were here last for Venche’s birthday party).