Vivian and I just got finished with a long, enjoyable weekend celebrating the long-expected wedding of our two friends Jenny and Kody up in Iowa Falls. (And it was a weekend spent mostly without the kids — hooray for grown-up time!) 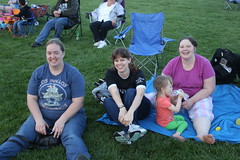 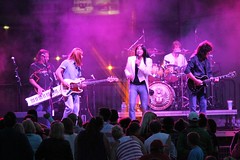 The long weekend started on Thursday evening, where we took Hannah and Aaron out to a “Throwback Thursday” concert at Loess Fest. Jessica and her housemate Amanda joined us on a blanket as the opening act, Red Delicious, played some 80s cover songs before Journey Recaptured took the stage. I’d heard some rave reviews of this band after they performed at Stinson Park last year, and they were very good. Hannah and Aaron were more interested in playing around on the great lawn, but it was good just to get outside with them before our long trip. 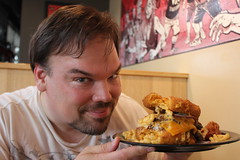 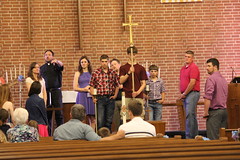 On Friday morning, Grammy came to watch the kids for the weekend, and Vivian and I headed off to Iowa. We stopped in Des Moines at Zombie Burger, where I ate a mess of fried insanity called Better Off Ched, which included slabs of fried mac and cheese for a bun.

We continued on to Iowa Falls up north, a quaint little town where Kody grew up. We met up with our cluster of friends at Immanuel Lutheran Church for a wedding rehearsal, and we also got to meet the Pastor of the church and Kody’s cluster of groomsmen and family members — including his mom who made everyone lasagna for dinner. Kody and Jenny passed around gifts for the wedding party, which included make-up bags for the ladies and such novelties as driftwood keg tap handles for the guys (OK, one guy).

We finished off the evening grabbing some last-minute items at Walmart as a blazing sunset happened, and then we made use of the AmericInn hot tub as Jenny and Kody told embarrassing stories over beer in the party room. 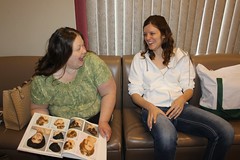 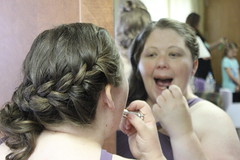 The next morning was a blur of getting ready, starting at the Trends hair salon down the street, where the girls all got their hair done. A killed some time snapping pictures of the scenic little town and some geese passing by. The girls continued prepping for the wedding at the church with make-up and curling irons, while the guys basically threw on their suits and called it good. Jenny got to “reveal” her dress to Kody in a painstakingly posed shoot by the photographer before we headed inside for a few hours worth of formal portraits of the bride, groom, and wedding party. 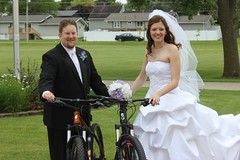 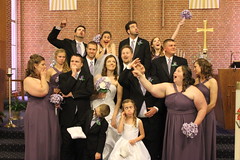 Eventually, of course, we had the actual wedding ceremony itself. Friends and family members started pouring into the church around three as the bride and groom went into hiding (for selfies). The church was eventually filled up before the wedding procession came down the aisle, ending with the bride and groom. One pastor read some scripture, another delivered a short sermon, and then came the vows, an exchange of rings, lighting of a candle, a pre-recorded song by Kody, and at least three prayers/blessings before there was a sudden and unprompted kiss that concluded the service.

The bride and groom dismissed everyone row-by-row before signing their wedding certificate and making their grand exit of the church to their heavily-decorated (with condoms) getaway car. They also had two bikes strapped to the roof, one of which was a wedding present for Jenny that Kody had presented to her earlier — giving them multiple means of making their getaway. 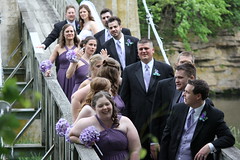 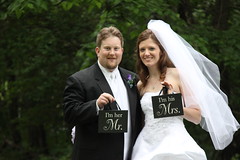 Of course, we couldn’t go to the reception without one more photo shoot down at Assembly Park. With the wedding party still dressed and hair all done, we got some photos on the playground, by a bridge, walking down a path, and of course jumping into the air. Kody was a bit preoccupied with getting back to the food, but the rest of us reminded him that this was pretty much the only time ever we’d be getting these snapshots. The barbecued ham could wait a bit. 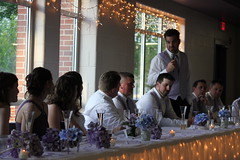 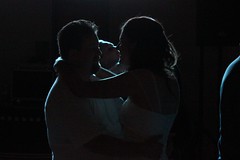 Finally came the long and happy reception down at Ellsworth Community College, with cake, cupcakes, dinner, and toasts, all followed up with the standard lineup of Wedding Reception dances — the father-daughter dance, the mother-son dance, dollar dances, and the Cupid Shuffle. Bouquets and garters were also tossed.

As videographer-by-default, I stuck around until the very end so I could capture the bride and groom taking off when they finally made their exit at 11:30 — after much prompting by me that they could leave the clean-up to everyone else and get on with their wedding night. 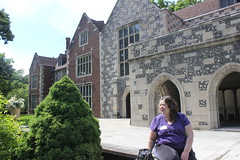 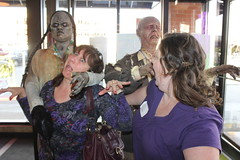 Vivian and I were so tired the next morning that we slept way past the continental breakfast at the Super 8, which ended at nine o’clock. As such, we made our way down to the Red Rooster Grill for some American-style diner food before heading out of town.

We decided to tour the giant Salisbury House in Des Moines with Lisa during the afternoon — the dream house of cosmetics magnate Carl Weeks designed after the King’s House in Salisbury, England. It was a gorgeous house built to suit a true anglophile (with splashes of French decor), and housed amazing pieces of artwork including one of only four Van Dyck paintings by in the United States. It was a lovely day, perfect for wandering the gardens afterward and then having an outdoor dinner at Zombie Burger (again). Lisa came with us to try a trailer trash burger and share a giant basket of blue cheese fries before heading home.

So thus ended a lovely weekend getaway for Vivian and me, full of quality adult time without having to wrangle our two kids. Of course, we did spend some time with them at the park the day after we arrived home. They seemed to miss us. Congratulations, Jenny and Kody, and thanks for giving us an excuse to a have a lovely weekend with you and all of our friends. Vivian and I spent the weekend in Cedar Rapids to attend my cousin Elizabeth’s wedding. I got to introduce Vivian to a huge chunk of my extended family, many of whom I haven’t seen in years. The ceremony was very small and informal, and afterwards we had some refreshments that included loads of great Brazilian food. I wish I could have sent my mom a bottle of Guarana.

I also took plenty of pictures, of course, as the family had fun together singing karaoke and visiting at Mary Ellen’s after the wedding. We also gathered at the Beckman house to celebrate Shannon’s birthday and play with their new cocker spaniel, Freckles “Gucci Gucci Goo” Beckman (the middle name picked by Shannon, spelled by me). On the way home Vivian and I stopped by the Machine Shed restaurant in Des Moines for a dinner that included a whole lot of Iowa pork and corn on the cob that Viv told me I ate much too slowly. Viv also had an insatiable craving for root beer floats afterwards when she spotted a sign for an A&W farther down the road on I-80.

We drove through a storm just west of Des Moines and were treated to the most gorgeous golden sunset I’ve ever seen before. It was like a little treat God had waiting for us at the end of our journey.

See video from the weekend