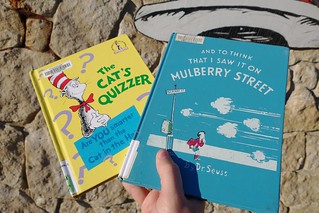 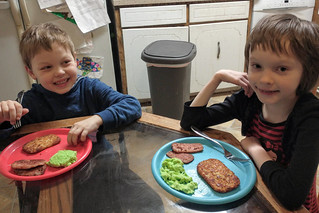 Dr. Seuss’ birthday was last week, so I dropped by the library in Bellevue to pick up a couple of his books on his birthday — namely two of the books on his “banned” list, “And to Think That I Saw It on Mulberry Street” and “The Cat’s Quizzer.” I had put a hold on all six books but was happy to nab just the two, and I read Mulberry Street to the kids that evening.

I also made a special dinner of actual green eggs and ham. The ham itself was its normal color, but the eggs were colored both with food coloring and with spinach in a kind of frittata. I wound up making more than enough eggs, which lasted us for a couple more breakfasts before they were gone. 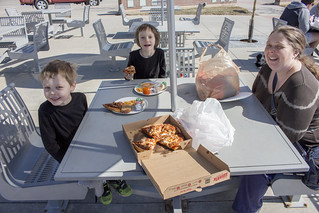 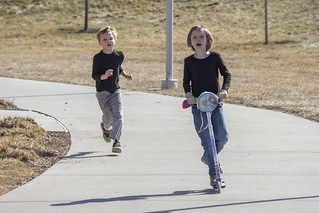 It’s been more than a relief to have a break from record cold and snowfall, so on Friday we had an inaugural visit to Stinson Park over the lunch hour. I ordered a small pizza from Godfather’s, which we ate together picnic style at one of the tables before the kids had some fun running around. Hannah made good use of her scooter, which she finally started to ride after we found it back in 2016 (abandoned with a note that said “free”) at this same park a few years ago. Aaron also got some quality time in on the swings before we called it a day. 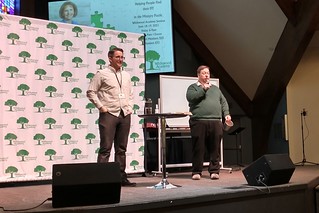 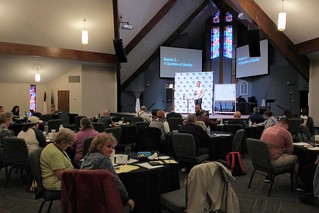 Our church also had its first “Wildewood Academy Seminar” on Friday evening and Saturday morning. Vivian and I decided to tag-team so we could both attend, with me staying home with the kids (making spaghetti and meatballs for dinner) and listening in on the live stream as Vivian attended in person, and then vice-versa the following morning.

The guest speaker was Casey Tygrett a “Theologian in Residence” at Parkview Christian Church in Chicago, and he spoke on a Christian’s “identity.” It was an interesting set of lectures but seemed focused quite a bit more on the “self” than on God. Still, I’d heard plenty of messages about the depravity of the human race and this was an interesting twist to say the least. 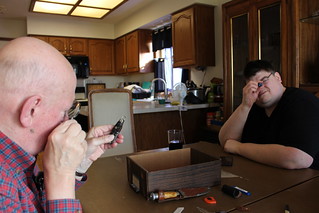 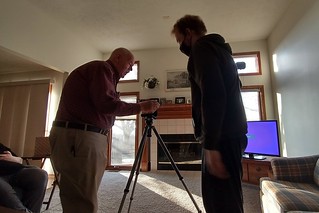 On Saturday afternoon, I took a walk in the lovely weather to my parents’ house to look through another one of my dad’s old boxes. This one was filled with old pocket knives and gadgets such as a pocket adding machine, a pocket grooming kit, and an embossing stamp with my dad’s initials. We also found an old button my brother Nathan had made, which said proudly, “I are a Brookwood student.” That brought back some memories.

Nathan eventually joined us as my dad dug through some photos and video he’d taken at age 12 of some model planes that he destroyed in an attempt to recreate World War II battle scenes he’d seen in movies. Nathan dropped by as well and showed off his new Nikon and a gigantic lens he’d bought to take wildlife pictures for a photography class at Southeast Community College he was apparently taking just for fun. 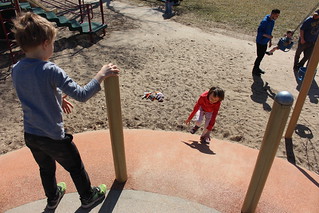 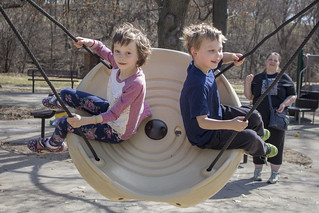 I made some eggs benedict Sunday morning, which was a delicious way to start the day. Casey Tygrett stayed to preach the Sunday sermon at church, and the kids grabbed some donuts before we headed down to Ralston Park afterward. We got some Burger King for lunch, and then the kids got to run around a bit. The last time I was at this park with Hannah, I’d turned 34 and she wasn’t yet old enough to walk. Now I got to chase her and Aaron around a bit with Aaron as they climbed, jumped, and “fought bad guys” from one end of the park to the other.

And because we still hadn’t had enough, on Tuesday we took the kids down to Elmwood Park for even MORE park time. Aaron and Hannah ran through “levels” on rocks, on nets, and in-between swings, and mommy and I took turns pushing them together on the big swing. The kids had some PB&J for lunch before trying out some exercise equipment, and then we went on a brief walk/scooter ride to the grotto and back. On the way, we found the broken shards of a plate that seemed to be the cathartic result of someone having a literal break-up (with someone named “Braden”).

I think after a long winter spell, we were more than ready for some fun outside. But who knows? We may yet have snow coming yet in April or May. (It’s happened before.)