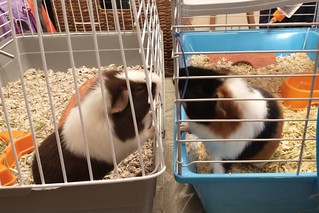 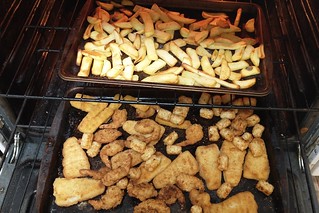 Our friends the Mills went on another road trip this week, which meant Harold’s mommy got to stay with us for a couple days. Hannah and Aaron enjoyed having the with us and set up a giant play-area for her and Harold to run around together in the living room, including when we had Virtual Church on Sunday (because of some more freakish snow).

In the meantime, it’s Lenten season again, which means fish fries. There are only a handful of options this year, but I thought we could start with one right at home — with some battered fish, fish sticks, fries, tots, and shrimp all from Aldi. We had a bit of a feast at our house for our first Fishy Friday. Then Hannah and Aaron played some classic NES games — specifically Super Mario Bros. and Maniac Mansion. Aaron even got to beat King Koopa (and rescue Toad, who Hannah described with a laugh as “the wrong guy.”) 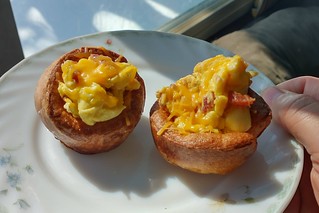 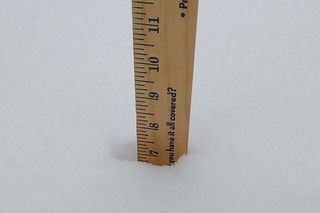 On Saturday, Vivian broke open a collector’s item to make some old fashioned Aunt Jemima pancakes for breakfast. She also made a batch of bacon with enough grease left over for me to make some tasty breakfast popovers, which I stuffed with scrambled egg, bacon bits, and cheese. Tasty! (Meanwhile, Aaron’s been having fun assembling his own breakfasts in the shape of a smiley face or the “Statue of Liberty.”)

Then overnight, we got SEVEN inches of heavy, wet snow dumped on us (which was forecasted to be two or less). That meant we stayed home from church and I had a serious day-long workout digging out both our driveway and my mother in law’s, with some lunch in-between to keep me going. Thanks, Vivian! 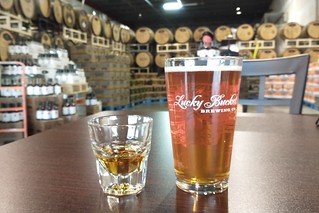 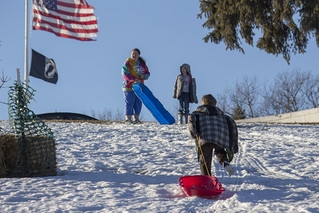 Fortunately, the snow melted fast as temperatures soared back into the 50s on Monday. I had a session of Beer and Bloviation with a few like-minded friends down at the Lucky Bucket. They also had a sale on cases of beer, $20 for 24 bottles, which I was allowed to mix and match. That should keep us stocked until after Easter, at least.

The melting was happening fast on Tuesday, so we took the kids down to a slushy, wet Memorial Park for one last season of the season (probably). They each got to coast down the eastern slope a bit but then turned to explore the park a bit, particularly where several people had been making snowmen and/or giant snow boulders along the south lawn. Mommy and the kids has also made one in our own yard, which hadn’t quite yet melted by the time I returned home to take a picture.