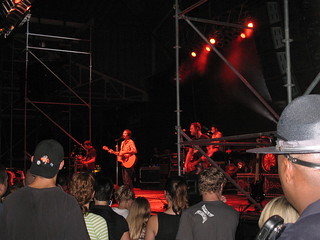 On Saturday, Vivian and I got to enjoy a day on our day on the Offut Air Force Base in Bellevue checking out their air show. It was my first time at such an event, and it was fun exploring the exhibits on display. We got to our the Virtual Military Experience, which was like a giant video game with model Humvees and model assault rifles, complete with simulated recoil as they fired at enemy targets on giant projector screens. We also got to walk inside a some giant cargo jets and peek at a few other models on display. A number of pilots demonstrated their skill in the skies above, including the Thunderbirds. They topped off the day doing a number of formation routines for the crowd below.

Afterwards, Vivian and I met up with a couple of friends to have some enormous hamburgers at Stella’s in Bellevue. Vivian and I had both heard people talking about this little diner, and it was honestly the epitome of what a hamburger restaurant should be: big burgers, fresh-cut fries, and nothing frozen.