Vivian turned 29 for the first time last week, so I and a bunch of our friends had a couple surprises in store for her. On Friday, a troop of us showed up at her workplace with a birthday cake for a little lunchtime surprise. That evening, we had our obligatory trip to JNO where Vivian got to have her fourth Birthday Jam on the floor of the Eagle’s Lodge. On Saturday, I took Vivian down for an afternoon at Thunder Alley for the afternoon. We had lunch at their little restaurant, and Vivian got to open some of her presents while we waited for our food. They included, among other things, a blue Jitterbugs bag filled with candy and limes, a bowling pin with balloons, and a couple Brian Regan DVDs, courtesy of Vivian’s new in-laws (i.e. my parents). Eric and a few of our friends decided to go play pool during much of this, so one of us decided to do Eric a favor and dress up his plate with his least favorite condiment. For the rest of the afternoon, we burned off our lunch in the arcade playing air hockey, Deal or No Deal, and a depressingly non-multiplayer version of Mario Kart. We did get to drive around the racetrack on actual go-karts, which was fun, and later played an agonizing round of laser tag. I’m pretty sure Eric’s team won, but since a computer glitch prevented us from getting the results of the match, we’ll never know how badly they beat us. 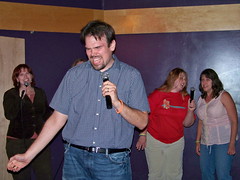 We stopped for ice cream afterward and then went on to Mic’s Karaoke Bar for some almost-tipsy crooning. I was able to get Vivian, Sarah, Merinda, and Lisa up on stage to perform Love Shack with me, which was definitely fun and well worth the price of a chocolate martini to give Vivian a shot of liquid courage.

Happy Birthday, Vivian! I can’t wait to see what happens next year.