Happy Halloween, everybody! Vivian and I enjoyed playing dress up with our friends once again. I bought a white collar shirt from JC Penney and put on some suspenders to become Bill Lumbergh from Office Space. I had to put on a few minor touches to complete the look, such as shaving off my infamous goatee and putting on my gigantic 10-year-old glasses. Vivian dressed up as a hot chick, and we enjoyed parading our costumes for a couple of our friends the week before Halloween.

Our mutual friend Jenny had a birthday party at Hugh’s house, where a bunch of our friends dressed up in amusing costumes and carved pumpkins together. Merinda also had another blow-out event at her house, where several guests did the dance from Thriller together on her basement dance floor. They’d apparently been practicing just for the occasion. I got video from both events and have it linked below via YouTube.

Highlights from our Halloween weekend 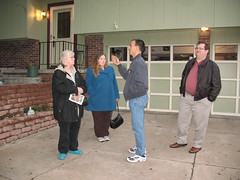 Vivian and I are closer than ever to being homeowners! After a month or two of thorough hunting throughout the Omaha metro area, we finally settled on a lovely little home down in Bellevue. We batted offers back and forth with the sellers and were finally able to arrive on a price last week. Before making our first offer, we had some of our friends over to see the house before making a final decision. It was quite fun to have a house party in someone else’s house. The home isn’t exactly what we wanted, but it’s a good location and a very fair price. We’re looking forward to moving in soon and calling it our own, but it still needs to be inspected, appraised, and underwritten before we can close. Keep praying in the meantime! In the meantime, we’ve still found time to enjoy parties at other people’s homes, including our hopefully soon-to-be neighbors in Bellevue, Troy and Merinda. Merinda had been planning a giant birthday blow-out to celebrate turning 30, and had managed to book the Mezcal Brothers to perform in her basement of all things. Unfortunately, they had to postpone their appearance, but we still enjoyed making a scene dancing to Thriller and a wide variety of swing tunes. Geoff, our new Irish friend, brought some smooth Irish whiskey that it made much easier to make fools of ourselves on the dance floor before heading home. Fall’s finally here, and with it comes weather that’s only slightly cooler than the weather we’ve enjoyed throughout the summer so far (which is insanely wonderful). Per tradition, Vivian and I went by Vala’s Pumpkin Patch to check out this year’s festivities. We went with our bible group from Christ Community Church, (which is the first time I’ve mentioned them in my blog so far, oddly enough) and got to wander through a corn maze, have some succotash, and pick out a pumpkin for carving later on. Another fall tradition is the Great at Adventures Hayrack Ride up in Santa’s Woods. Vivian and I opted to take the less “rowdy” hayrack ride so we could enjoy looking up at the stars and not have to pick straw out of our clothes and hair for the next two weeks (like some other friends of ours will have to do). We did get to enjoy swing dancing in the barn to some country music and grilling hot dogs and smores on an open fire as well.