It’s summertime once again, and my parents stopped to visit us on their annual road trip across the United States. There are three great things about being a college professor — June, July, and August. It was especially nice to have a house large enough for both my parents and my brother Jonathan, all of whom spent the week with us.

I took Thursday off to spend some time visiting with everyone, and we were treated to lunch at Mahoney State Park with a few of dad’s colleagues with the National Association of Scholars. It’s always fun to hear them discuss what’s happening behind the scenes in academia, particularly my dad’s theory of the coming “academic bubble.”

That evening, we got some burgers, fries, and onion rings from our local landmark burger joint, Stella’s. We got to use our new deck table for the first and enjoyed them outdoors in a relatively mosquito-free environment (that’s in part to our friendly local bats). We had the whole family over for dinner on Friday night, which included Nathan and his wife Ranae. To celebrate, my dad had Dreamland Barbecue in Tuscaloosa, Alabama overnight some of their famous barbecue ribs that we enjoyed many years ago when we lived down there. The big box of southern goodness came with a loaf of white bread and a couple extra jars of sauce to save for later.

We spent a while catching up with Nathan and Ranae, who my parents hadn’t seen since they were just dating a year ago, and played a couple goofy rounds of Apples to Apples before calling it a night. On Saturday, Vivian and I took mom and dad down to the Farmer’s Market in downtown Omaha to browse for some fresh produce to enjoy back at home. We bumped into a street magician who had to “borrow” a $20 bill for a magic trick and had some homemade root beer and other samples before retreating back to the car to escape the blistering July heat. (I tried unsuccessfully to get mom and dad to run inside Ted & Wally’s instead, where they were serving Kahlua-flavored ice cream.)

We also dropped by an antique mall local somewhere in the vicinity of Waterloo. I had been hoping to see a few “antique” toys from my own generation, but they had mostly old kitchen implements, neon Coke signs, and a few hilariously outdated books on the shelves. We returned home to watch a particularly cheesy episode of Mystery Science Theater 3000 while Vivian made some homemade ice cream. Vivian’s been on a homemade ice cream kick ever since she found a recipe in the Fontenelle Nature Center’s newsletter, so my parents gave her an ice cream maker as anniversary gift. 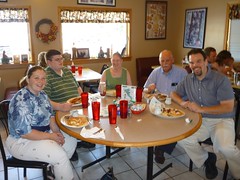 On Sunday, mom, dad, and Jonathan joined Vivian and me for a church service at Christ Community Church. Afterward, we dropped by Amato’s Cafe for lunch. Dad had seen the small cafe on 60th and Center featured on the Food Network program Diners, Drive-ins and Dives with Guy Fieri. It’s a quaint little cafe with gigantic ricotta pancakes, and they’d apparently been getting plenty of traffic since being featured on the show. If you decide to drop by, come early — they close at one o’clock (1:30 on weekdays). Jonathan headed on home to Wayne a little after lunch on Monday, and then Vivian, mom, dad, and I spent the afternoon visiting the Strategic Air and Space Museum‎ out by Mahoney State Park. We’d driven by the display fighter jet on I-80 for years but had never ventured inside the giant museum / hangar, and it was quite an interesting visit. I actually found a display on Nazi eugenics more interesting than all the aircraft on display (which included a replica of the Pod Racer from Star Wars: The Phantom Menace), but we all had a good time for the three or so hours we were there, and we hadn’t even seen everything the place had to offer by the time it closed.

We stopped by a cornfield so dad could take a couple quick, corny photos of Vivian and me before calling it a day. Vivian made up some tasty marinated salmon and sushi for dinner, and we wound down watching The Pajama Game downstairs before bed.

All in all, it was a great (albeit lazy) week with the family, and I’m sure we’ll be doing it all over again next year.