Happy 2012, everybody! The Johnson Family had a wonderful little reunion of sorts over the year, as you might have guessed from my blog’s year-end review. Mom and dad flew into Omaha Thursday afternoon, so I took a few days off work to spend some quality time with them and their new granddaughter. The weather has been unseasonably beautiful for the last few weeks, so we enjoyed both a green Christmas and safe travel conditions for the folks. (It was even warm enough for Vivian and mom to go for a walk with Hannah!)

Naturally, we had to celebrate by dropping by Louie M’s Burger Lust on Friday, but mostly we spent a good deal of time doing nothing but taking turns cuddling with Hannah around the house. 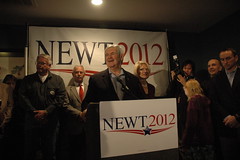 On Saturday, Dad and I took a trip to Tish’s in Council Bluffs to say hello to Newt Gingrich, who was dropping in again shortly before the Iowa Causes began. The place was jam-packed with people and newsmedia, who all seemed to enjoy cramming into every bit of available space for pictures and video as the former speaker squeezed his way to the podium. Newt’s wife Callista was also there, as were Newt’s daughters and a handful of grandchildren. Dad was lucky enough to get a seat in the front row, which made for some nice dramatic shots. We stuck around to shake hands with the Gingriches and get a picture with them before heading home. 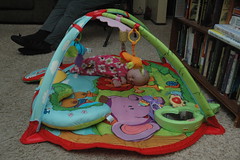 Back home, the rest of the family — namely Nathan, Ranae, and Jonathan — showed up later that evening to exchange belated Christmas gifts (and birthday gifts for the parents). Mom got a puzzle, dad got framed photographs of Grover Cleveland and Calvin Coolidge, and Hannah got a small plush monkey from Campbell University (among other things). I volunteered to make spaghetti for dinner while mom tossed up a salad. It was the first time I can recall the two of us ever cooking together (or at least cooking in the same kitchen). Jonathan brought along an old film called Ruggles of Red Gap, so we watched that while we ate. We called it a night around eight o’clock as Nathan and Ranae headed home and mom and dad headed back to the hotel. The rest of us stayed up until midnight to watch the ball drop on Times Square while sipping sparkling wine and Martinelli’s to ring in the New Year.

(We also wished a Happy Birthday to Santasaurus.) On New Year’s Day, Vivian and I joined both sets of grandparents and a handful of our friends at Twin Valley Church to witness Hannah’s dedication before the congregation. It was wonderful to have both sets of grandparents on hand for the occasion, especially since this was the first grandchild on both sides of the family. Drew said a few words and prayed while holding our little girl. She was very well behaved, though Vivian and I were both holding our breath with pacifier and bottle ready just in case we needed them. Special thanks to Eric for taking all the wonderful photos.

Afterward, we rang in the New Year together down at Village Inn over dark coffee and breakfast-for-lunch. The grandparents joined us again that evening for ham and black-eyed pea soup for dinner. The rest of the weekend wound down quite uneventfully, which was fine by me. We spent more quality time hanging with the folks and taking plenty of adorable pictures before mom and dad flew home Tuesday morning.