Our little girl Hannah got to take her first trip to the circus this week! Vivian has become a stay-at-home mom, taking care of Hannah during the day for now and taking the job back from Grammy and Grumpy Daycare. It’s going to be a financial pinch to be sure, but her move to be a full-time mom will allow her to do things like take Hannah to see live elephants march around the Omaha Civic Auditorium. That’s what she did on Thursday with Donna. Hannah even had a cute little clown outfit to wear as she watched elephants and horrifying costumed characters drop by to hold her. On Saturday, the whole Johnson family dropped by to help Jenny move out of her house in northwest Omaha and into an apartment down on Q Street. It was kind of sad to say goodbye to the house with the giant backyard that had been host to any number of parties — Christmas, Independence Day, Luau, and of course Taco. I forgot what a workout it was to try to squeeze a couple couches out a tiny front door and up a flight of stairs, but the whole ordeal was over fairly quickly. We had pizza and chicken afterward before dropping into a coma for the rest of the afternoon. That evening, the Johnson Family dropped by the West House by Lake Cunningham to say Happy Birthday to Sarah. Hannah got to wear her “little black dress,” we had shrimp and fruit with a handful of our friends as Dean and Sarah made music on a variety of instruments before we headed home. 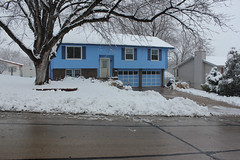