T’was the week before Christmas, and the Yule-Tide celebrations continue. We’ve been having annual get-togethers with Jenny and our cluster of mutual friends for a couple years now, and this time around someone had the bright idea of hosting this year’s Christmas party at our house. This worked out great for Vivian and me, because we were able to put Hannah down for bed before anyone arrived and didn’t have to worry about arranging a babysitter before spending a good, long evening with our fun friends.

We had plenty of food and drink on hand for everyone, and we had a White Elephant gift exchange that included such inexplicable gifts as a 1981 dish towel calendar, 90s music CDs, A Christmas Story wristwatch, pregnancy magazines, and a ceramic hippopotamus. We got a lovely fire roaring in the basement downstairs afterward, which made things perfectly cozy for roasting marshmallows and then playing Taboo and a couple hilarious rounds of Telestrations. Vivian won the evening by coming up with a lovely illustration of “Scapula.” 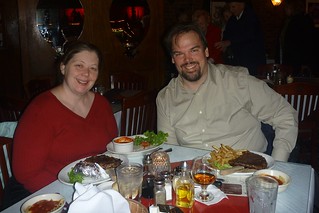 On Sunday, Vivian and our church’s ensemble Christmas Choir got to perform a medley of songs in front of the church during offertory, which was quite lovely.

Then that evening, we celebrated the seven-year anniversary of my asking Vivian out on our first date. Grandma and Grandpa came to babysit Hannah and take her to church to rehearse for the Christmas Eve pageant, and Vivian and I dropped by Caniglia’s Venice Inn for dinner. We’d visited the lovely little Italian steakhouse (winner of Food Wars’ Omaha steak episode) several times in the past via the Friendship Program Christmas Party, which seems to be held there every year. I’m sad to say we didn’t have nearly enough room for the liver pate, toasted ravioli, mostaccioli, potatoes, and rib-eye steaks we ordered, but we ate just enough to have some nice leftovers for Monday’s lunch.

After dinner, we took a trip downtown to get a couple anniversary snapshots on the festively-lit Gene Leahy Mall, and then we dropped by the Old Market Candy Shoppe to pick up a couple pounds of fudge. Our first date had been to the old French Cafe, and immediately afterward we dropped by the little candy store for fudge and have made an annual habit of it ever since.

It’s hard to believe that all took place seven years ago. My, how time flies!