We had a couple Happy Birthdays to celebrate over the weekend. My co-worker, Dr. Catherine Keefe, celebrated her birthday at Jitterbugs Night Out (where I knew her long before working with her professionally), so Vivian and I dropped in for a night of dancing and birthday cake. A few of my fellow employees from the Institute dropped by as well, and I got to share with them how I met Vivian and eventually proposed to her in this old dance hall a few years ago. We participated in the birthday jam and the shim sham as usual, and Vivian was even lucky enough to win a door prize — two free passes, so you know we’ll have to come back.

The next day, we celebrated Dennis’ son Matthew’s birthday down at their house with a handful of their mutual friends and little ones. Dennis made up a bunch of birthday cupcakes that we ate together to get sugared up. Hannah shared her sugar high with a few other little ones and got to bang on the piano a bit before we called it a night. 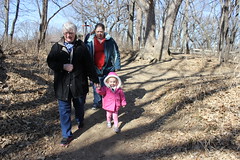 On Tuesday, the Institute was closed in honor of the Feast of the Annunciation, a Catholic holiday I was unaware of. That meant I was able to spend time in the morning with Hannah, Vivian, and Grammy at Mudpies. Hannah has been spending many a Tuesday morning at the Fontenelle Forest taking nature walks, exploring the museum, and making crafts with other little ones. It was the first time I’d been able to participate since she started this program a year ago, so it was fun to tag along with my camera.

Also, don’t ask dad to make you broccoli pancakes unless you mean it. 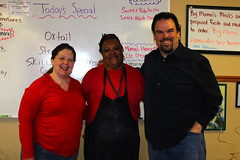 Vivian and I spent the rest of the afternoon having a “date day” together. We started off with lunch at Big Mama’s Kitchen in North Omaha, which we’d heard about even before it had been featured on Guy Fieri’s Diners, Drive-Ins and Dives, (or on a Food Network reality show). It’s located in the old cafeteria of the now-closed Nebraska School for the Deaf, which made Vivian and me very confused when we were directed there on Google Maps. The food was fantastic, though, with plenty of soul — I had oven roasted chicken, greens, and sweet potato pudding and even had room for ice cream afterward. Tuesday afternoon made for a fairly quiet lunchtime, and that meant we got to have a quick photo with Big Mama herself before we were done.

After that, I took Vivian to the AMC 17 in Council Bluffs so she could finally see Frozen. We actually had a private screening, as nobody else had bought tickets for the two o’clock matinee.