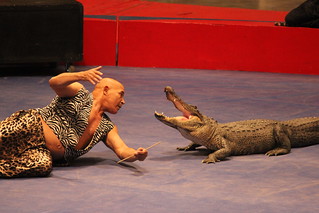 It’s been a fun and busy week leading up to our “Gender Reveal Party” on Saturday.

On Friday, I got to spend a bit of family time with Vivian, Hannah, and even Grandma Johnson down at the Shrine Circus. Hannah had gone to the circus just once as a baby, so now she was hold enough to be properly terrified of clowns and such. We also got to enjoy seeing some animals perform, including a cute dog and pony show, Tahar “King of the Alligators” Douis, Anna Louise the dancing elephant, which Hannah discovered was much larger in real life than her board books at home would suggest. My favorite act was Jonathan Rinny, who could balance on a stack of cylinders rolling in all different directions, which was quite a feat. 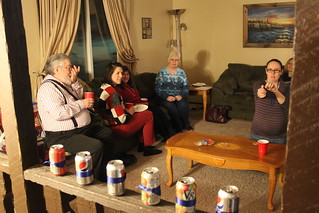 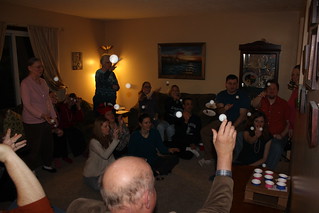 Then came the main event on Saturday night! We invited a bunch of our family and friends over to play games, have some food, and learn whether our new bundle of joy (due in June) will be a boy or a girl. We divided up into teams of pink and blue to start the night off (with appropriate colored beads). Representing pink were Lisa Barrett, Jack, Tamra, Randy, my mom, Donna, Jen, Jon Paper, Lydia, and Jenny. On the blue team were Lexi, Drew and Teresa, dad, Dennis and Kara, Anne, Libby, Kody, and Jolene. Our series of games included tossing ping pong balls into cups (all at once), answering some Battle of the Sexes trivia, and snapping rubber bands at a line of pop cans. This last one was much more difficult than anybody expected, and the only ones who managed to knock off a few cans were Drew, Jack, Jon Paper, and, surprisingly enough, my mom! Contestants all won “He She” bars along the way.

A little after nine o’clock came the big reveal, as Vivian and I cut into Donna’s beautiful Baby Cake. Donna was the only one in attendance to learn the baby’s gender in advance so she could fill the cake with either pink or blue for the big reveal: 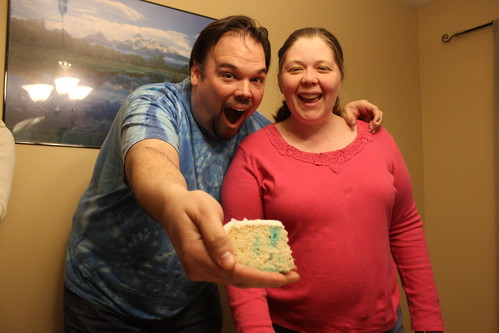 That’s right, I’m going to have a son, and the chromosomal balance in the Johnson Household will be brought into balance at last. We stayed up until nearly midnight afterward enjoying cake and a few crazy games of Telestrations. As usual, we had a number of hilarious (and confused) artists in our group.

The next day, after a long night of celebrating, we went back to Twin Valley Church, and my mom and dad were able to come by and have a potluck lunch with all of us. Hannah had some fun getting chased (and kissed) by a couple of the boys, and others of us welcomed little baby Jonah Campbell to our congregation after a few long weeks in the NICU.