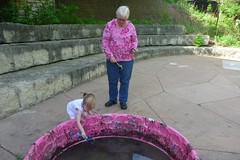 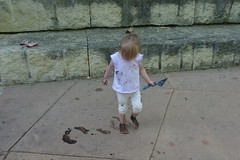 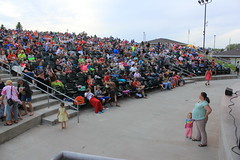 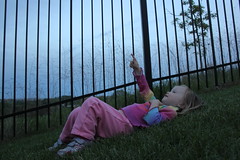 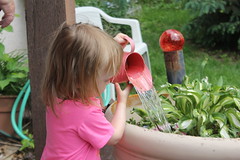 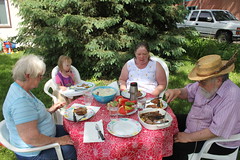 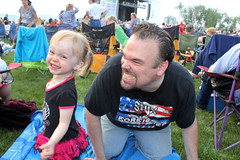 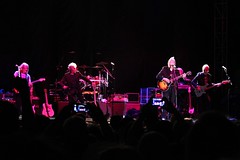 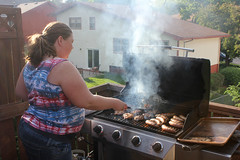 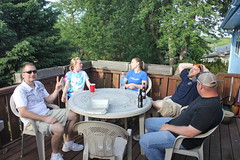 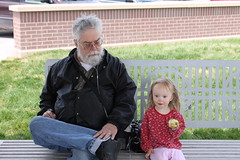 Lately, it seems like Stinson Park has become the hangout of choice for our family, our circles of friends, and the Omaha community as a whole. It’s just a short walk from where I work, so whenever the weather’s turned nice, I enjoy a stroll down to have lunch with Vivian and Hannah over the noon hour. (Jones Bros. also tends to have free cupcakes on Mondays and Wednesdays at 12:30 pm, which makes it all the more enticing to drop by.) Vivian’s dad Jack dropped by with Hannah last Wednesday after Vivian’s ultrasound and gave our girl some time to enjoy the playground on a gorgeous spring day. The Wohlner’s across the street is closing, unfortunately, but since everything is being sold at a discount (25% and then 35%), it made perfect sense to drop by to pick up some lunch while we were there. 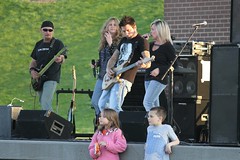 On Saturday evening, we dropped by the park to enjoy some outdoor music provided by Sinners & Saints as part of the park’s concert series. Jenny and her boyfriend Kody, who just recently got engaged, invited us along with a cluster of our friends to enjoy the outdoor music. I grabbed some discounted cheese from Wohlner’s for a snack, and Hannah got to play on the playground at night for a chance, in-between dancing to a set of cover songs from the band. 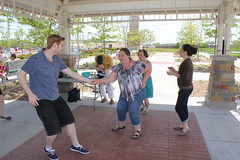 The next day, we came back to the park yet again for Lindy in the Park. Billy and his family were all decked out in stripes for the afternoon, and Vivian and I got to dance with the handful of other swing dancers who showed up. I also danced a bit with Hannah, but she seemed a bit more interested in running back and forth to the playground than trying to figure out what weird steps daddy seemed to be doing.

Hopefully, the lovely cool weather will last a bit longer as we head into June, since we have more plans to enjoy the great outdoors over the next week or two to come.

It’s Springtime, and the living is busy! Vivian’s old friends Sherry and Rob are in town again trying to fix up and sell their house, so we had them (and Jack) over for dinner on Thursday night, which gave me an excuse to whip up a double batch of chicken alfredo, which we ate while catching up. Rob showed me a bunch of his nature photography and snapped a new family portrait for us before we put Hannah off to bed. 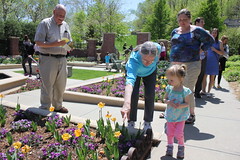 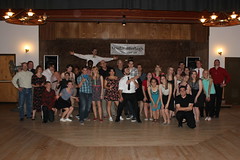 On Friday, Omaha’s Lauritzen Gardens had free admission for National Public Gardens Day, so of course we had to drop by and take advantage. Grandma and Grandpa Johnson came along with us to sniff around in the Victorian Garden, and Hannah got to check out some peonies, lilacs, and many other fragrant blooms that were on hand (no roses yet, though). Hannah also stumbled upon a children’s area with a wood cabin and a cluster of mint that she and other children were able to taste (according to the sign). It was perfect weather for a nice long walk in the gardens and there were plenty of other people on hand taking advantage of it.

That evening, Jack dropped by to babysit Hannah as Vivian and I went off to set up at Jitterbugs Night Out again. We had another large crowd for the beginner’s lesson, though we wound up calling it a night before doing much dancing. I hate to admit it, but I’m either old, out of shape, or both. (Or maybe I just need new shoes.) 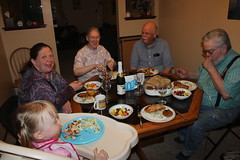 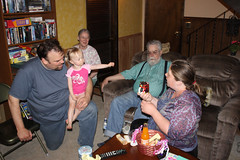 Saturday was a busy day full of mowing lawns (namely my parents’), buying furniture (a new dresser for Hannah), and buying groceries (for Mother’s Day). Sunday was a quiet day at church as more and more people seem to be out of town, but we still had lovely Mother’s Day flowers for all the moms in attendance. I spent a good portion of the afternoon trying out some recipes for fruit salad, honey-lime chicken, and coconut lime rice for a Mother’s Day dinner. My parents and Jack dropped by to eat with us, and as soon we were finished, the tornado sirens went off. There was apparently a serious storm rolling through, but we didn’t get much more than lightning and rain as it passed. We did stay in the basement for a while watching the weather report and having ice cream cake. We also had a few gift baskets with goodies for my mom and for Vivian. Hannah and I spent Wednesday evening painting a ceramic mug, which Hannah really seemed to enjoy.
Happy Mother’s Day!

There are so many things I love about springtime, from trees all in blossom to the beautiful weather that comes between the winter frost and the summer furnace. Of course, the weather in Nebraska is anything but predictable, but it’s been just perfect for a week or two and that calls for plenty of fun outdoors (particularly at the park). 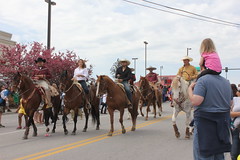 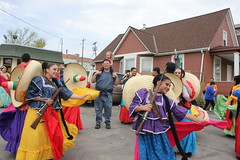 On Saturday morning, Vivian and I went up to South Omaha to watch the Cinco de Mayo parade. This was Hannah’s third time seeing the parade, and this year we decided to check out the view from the south end of the route around 24th and L Street. It was a totally different experience, with people crammed elbow-to-elbow along the city streets, making it a bit difficult for us to find a place to watch. The parking lot of the Subway around the corner turned out to be just fine, however. We got to see the usual cluster of local businesses, politicians, drill teams, horses, and dancers dressed in festive garb. What made watching the parade from the finish line special, however, was that the band and dancers holding up the rear stayed around for some extended music and dancing for anyone who cared to stick around and watch, which was particularly fun.
We made the obligatory run to Jacobo’s afterward for frozen tamales and other south-of-the-border foods for Monday night and then grabbed Alvorado’s on the way home. 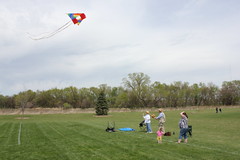 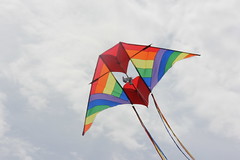 On Sunday, we decided to go and fly a kite down at the La Vista soccer complex with several dozen other avid kite flyers. My dad was an avid kite-flyer a few years ago, but North Carolina is fairly stingy with wind and he hadn’t done any real flying since around 2003. He definitely seemed happy to get our little rainbow kite airborne once again. Hannah also had fun running around in the giant empty green spaces, checking out some giant flying fish and grabbing for candy in a candy drop with a bunch of other kids. We also decided to send her little Cow Baby airborne just for the fun of it. Dad got it all tied up securely, Hannah gave it a kiss for luck before sending it airborne at the end of the day. There’s nothing quite like flying a kite to make an afternoon seem worthwhile (definitely more fun than doing yard work, but don’t tell that to Hannah).