As you can probably imagine, Vivian and I have been busy tending to our new little bundle of joy here at home. It’s been a bit of an adjustment having two little ones needing attention and getting used to the midnight feedings once again, but having two happy and healthy kids is a blessing and all we could ever want. Of course, we also have two sets of grandparents on hand to help out, which is wonderful if we ever need to get out of the house (or drop by for hamburgers and Mystery Science Theater). 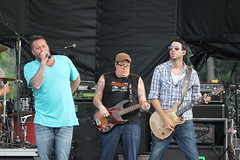 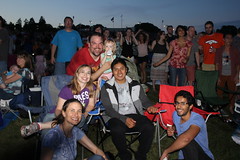 On Friday night, Vivian’s parents watched Baby Aaron so the rest of us could attend Bank of the West’s annual concert at Memorial Park. This year’s lineup had four different bands that sounded like a “best of” mix-tape from the late 1990s: Blues Traveler, Sugar Ray, Uncle Kracker, and Smash Mouth. Vivian didn’t recognize any of the bands by name, but she remembered the songs as soon as they started playing. Even Hannah seemed to enjoy the show, cheering along with the crowd and clapping her bears’ paws along with everyone else to the music. Around 70,000k people braved the weather to join us at the park, and aside from a five-minute sprinkle, none of the thundershowers everyone had been predicting came to pass. A cluster of our friends came to join us at the spot we’d staked out and stuck around for the firework show at the end of the concert. 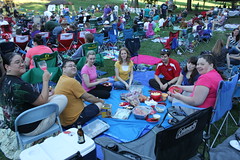 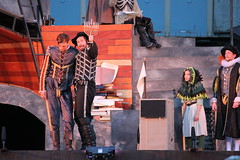 On Saturday, we partook in another one of my favorite summer traditions: Shakespeare on the Green. This year’s comedy was “The Compeat Works of Shakespeare (abridged), which played out like a long bit of sketch comedy using an amalgam of Shakespearean plays as a springboard. Julius Caesar, Romeo and Juliet, Merchant of Venice, Macbeth, Hamlet, and light-saber duel here and there — nothing was left out. The cast even found their way into the audience and onto the scaffolding, which made for a stranger, more interactive show than usual.

This evening was also predicted to be a rainy affair, but the weather turned out to be unexpectedly gorgeous instead, which made for perfect picnicking and Shakespearean dress-up. The flutists and wandering singers were on hand as usual, and even Scott Voorhees from KFAB (but sadly no juggler). We had our gang of friends sharing a blanket with us as usual, but the sword-fighting was left to kiddos this year. Someday Hannah and Aaron will be old enough to come join us for a little dress-up. Someday.