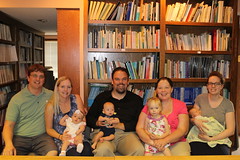 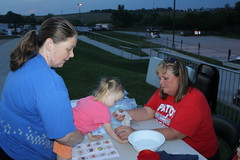 On Wednesday, we had a baby shower for a trio of new little ones at the Institute, which included Baby Aaron. A bunch of my co-workers got to take turns holding him as we all had cake. Our resident ethicist Sister Renee also got to meet both Hannah and Aaron for the first time ever downstairs. (She had a chewy piece of Werther’s candy for Hannah, which she immediately put to use as a mustache.)

Then on Friday, the Johnson Family headed down to the Sumtur for the final family outdoor movie of the season, The Sound of Music. The presentation came between a couple passing storms, but the rain held off long enough for us to watch (and sing along) without any “raindrops on roses.” The only people who got wet were the Sumtur Staff doing the ALS Ice Bucket Meme challenge down in front of the stage, though Hannah also got a damp arm from a temporary tattoo. 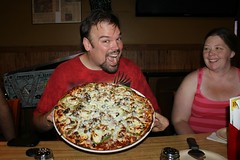 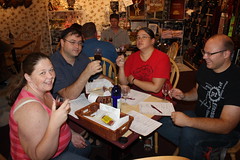 On Saturday, I got to celebrate my birthday a little early, since I happen to share it with my Uncle Ben and Aunt Carol’s anniversary, and this year they’re celebrating their 50th in Cedar Rapids. Jack and Donna got to take the kids for the evening as Vivian and I drove down to Lincoln to have pizza at my favorite pizza “joint,” Big Sal’s. Phil and Jen and Jon Paper drove down to join us, and after getting our fill of pizza, we drove on up to James Arthur Vineyard for a little wine-tasting. I got a sampling of a red wines ranging from Sweet to a Port, and then we explored the grounds a bit as a live band called Tunafish Jones covered a few classic tunes that the middle-aged crowd could dance stagger around to. 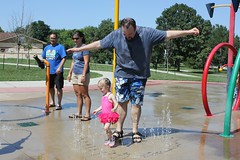 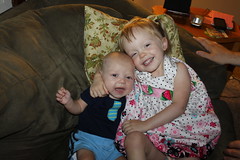 Sunday was roasty and toasty, so we took Hannah down to the splash park on 72nd and Harrison. Mom and dad got a little wet walking her through the sprinkler and splashing gizmos of the water zone, but she spent just as much time wandering about the “all access” playground area swinging and climbing on overhead bars (with a little help from Daddy, of course).

Then Sunday night, we decided to do a quick photo shoot with both our little ones. Aaron seemed to be in an agreeable mood, while Hannah barely sat still long enough for me to trip the shutter once or twice. It made for some fun, quick snapshots of our little kids, and Aaron even got to receive his first noogie from his big sister (and probably not his last).