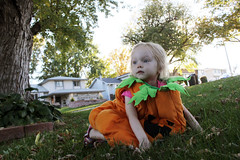 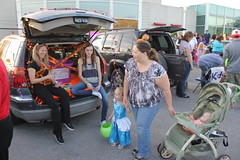 Halloween is coming soon, and that means breaking out the old Pumpkin Costume for Hannah to try on and see how much she’s grown in the past year. We’ve been able to snap a photo of her in her costume every Halloween of her life so far, and I expect it’s a tradition that will hold up just as long as the costume does.

On Friday night, the Sarpy YMCA had their annual Trunk or Treat event, so we took Hannah and Aaron down to get a bit of a sugar fix for the evening. This year, Hannah’s going as Cinderella (and not Elsa, as every other little girl in the country seems to be dressed as). We bumped into a few friends as we made our way among all the open trunks of candy. Hannah got to have some fun in the bounce houses inside afterward, jumping around as much as she could in her floor-length nylon ballroom gown. Aaron’s just recently discovered his toes and will likely be playing with them rather than doing any serious trick-or-treating this year. 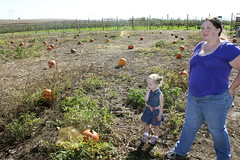 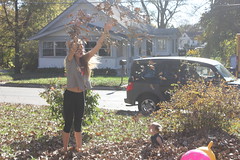 On Saturday, we drove down to Union Orchard to ride on a wagon, pick out a pumpkin and have a couple Apple Slushies and Donuts, and then Hannah broke in a few of the kiddie rides before we left. We drove back up to Bellevue to have an afternoon at Toni’s house celebrating her birthday with a few of her family and friends (and jalapeño poppers). Hannah had fun running around with a few of the kiddos present, discovering the shows of swinging in a hammock and showering other people with leaves. Aaron got to have a few cute moments and was quite happy just being passed around from person to person.

We had a bit of excitement around 3:45 as a motorcyclist was speeding down the boulevard and ran head-on into a nearby Jeep. The street was narrow with cars parked along the north side, and the bulky Jeep didn’t have any room to maneuver out of the way before the motorcycle came along. I got to see most of the accident out of the corner of my eye and take a couple pictures for the cops who showed up. The motorcyclist tried to make a break for it once people started talking about calling 911. We suspect he may have been enjoying a few adult beverages before his joyride. 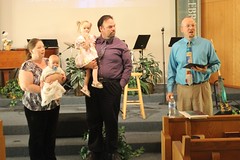 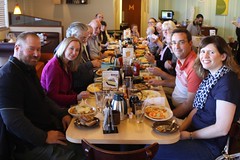 On Sunday, we had Aaron dedicated before the congregation of Twin Valley Baptist church, saying our vows to raise him in a Godly, Christian home with the help of family and friends present. He wore my grandfather’s 116-year-old baptismal gown, as Hannah did, while we were up at the front with Pastor Drew. After the service, we and our gaggle of friends and family went down to the Village Inn on Fort Crook for a giant family luncheon of pancakes and broccoli. Hannah’s friend Sam came along, and she got to practice a few more of the frog faces she learned while at Lacie and Caleb’s wedding last week. She’s getting frighteningly good at making them.

In other news, with the weather being perpetually gorgeous this fall, I decided to try biking to work a couple times with my dad’s bike. The Keystone Trail runs fairly close to our house and my workplace, so it made for a perfect route to ride some five miles each way. That is except for the giant chunk that the city of Omaha decided to demolish between Grover and Center, diverting traffic from the lovely level trail to the crazy ups and downs of 72nd Street. Seriously, UNO, did you really need four months to create a pedestrian bridge for a parking lot for your new hockey arena? Tell people to park in Bellevue and just ride their bikes on up. It’s better than sitting in bleachers watching the guys on skates get exercise.