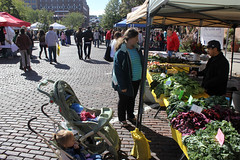 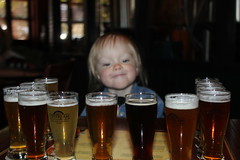 On Saturday morning, Vivian and I took both of the kids down to the Farmer’s Market, braving a brisk October morning to walk among the vendors looking for “unusual” produce and other unique edibles. I think many of the vendors must have cut and run this late in the season, since most of the items for sale were available at any grocery store (and likely much cheaper). Our favorite vendors such as the bakery and root beer stands were missing, but we did get some coffee from Tap Dancers down at the corner. We eventually nabbed some tiny eggplants, peppers, and some Chinese Spinach, all of which seemed suitable for an ingredient party.

Of course, we also had to stop by the Upstream for lunch so Vivian could get the flight of beers I got for her birthday. It was too cold to eat outside, but that didn’t stop us from recreating a photo of Hannah happily watching the colorful, bubbling samples of beer in front of her. (No tasting, sweetie.) 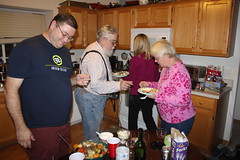 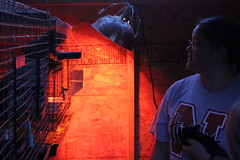 That evening, Phil and Jen had us over for another Ingredient Party, which included a Mel Brooks movie marathon (History of the World, Young Frankenstein, and Blazing Saddles). Hannah got to see some of the fluffy bunnies downstairs that our favorite culinary couple were raising for Hasenpfeffer, and I was just sick enough to get a gruesome “before and after” picture. Phil had invited Vivian’s folks along, and they were actually the ones who brought along rabbit to have fried up for everyone. (It tasted like chicken.) A few other mutual friends were there as well, including Kristen, who got to meet Baby Aaron for the first time, Luke, Cameron and S. Jael, and Tamra, who kept Hannah occupied with the many stuffed toys she brought with her.

The food was all good, of course, though at the end I got to have a taste of masochism by tasting some Seven Pot Pepper spice. It’s not quite unlike setting your tongue on fire, though after ten minutes or so of sheer agony, it went away without so much as a tingle left behind (and took the burn from the jerk chicken with it, strangely enough.) 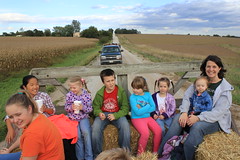 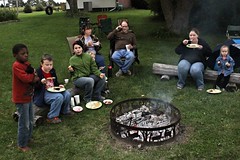 On Sunday afternoon, we headed down to the Hall’s place along with the rest of Twin Valley Church for a Hayrack Ride and Potluck dinner. After chasing Shawn’s new cat for a few minutes, a quick trip on the swings and a hop on the trampoline, everyone climbed onto the hayracks for a quick trip through in the country. It was a lovely, brisk fall day, with plenty of horses roaming the countryside for us to yell at as we passed. There were a few showers rolling through the area, which made some some gorgeous pictures once the sun started to set. It started to sprinkle just as we returned to the ranch, so we had to grab our chili and duck in and out of the shed as the rain passed.

We had a roaring fire that was useful for roasting both weenies and marshmallows, and then we showed the kids gathered around how to tell a “progressive” story around the campfire. The median age of our group of storytellers was about six, so we naturally got opening lines such as “It was a dark and poopy night.” The younger they are, the easier it is to crack them up. Meanwhile, the grown-ups played a marshmallow-stuffing game of “Chubby Bunny,” which I would have gotten a picture of if I hadn’t been engaged in such riveting storytelling (and snapping pictures of the mortal combat happening on the trampoline) before heading home.