Autumn is usually a busy time for us, with special events happening almost every weekend. The weekdays are filled with activity, too. On Monday, Vivian brought Hannah and Aaron to the park to grab a cupcake and make use of the swings and slides before it gets too cold. Then on Thursday I attended a luncheon and got to meet Pete Ricketts, who’s running for governor. I’d spotted him in a parade or two before, but it’s always nice to be able to shake hands and ask questions to a candidate before you decide to vote for him. 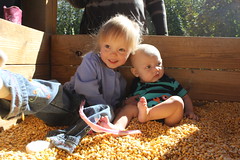 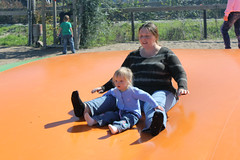 The major event of this week, however, was our annual trip to Vala’s Pumpkin Patch. The trek to Gretna gets a little more cumbersome (and expensive) every year, particularly now that we have two kids to bring along. We actually headed up a little early in the morning (cutting around the traffic jam on 180th via our usual shortcut) just so we could get in some kiddie activities before our “grown-up” friends arrived. Hannah and Aaron both got to spend some quality time in the giant corn bin (before snacking on some a little later), and Hannah got a couple turns on the jumping pillows before the line got too long. 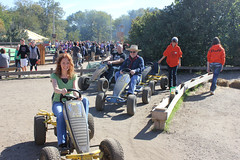 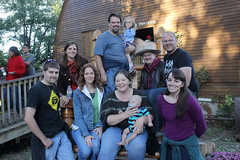 We met up with our cluster of mutual friends around lunchtime as they were busy with the go-carts. We trekked about with them for a while, going back across the railroad tracks to watch the pig races and go down a couple slides together. The corn maze was decidedly smaller this year, as they built some kind of midway of carnival games in a large swath of it (complete with those hammer-swinging, bell-ringing games of strength). We got separated in the storybook village right before getting an obligatory group photo on the giant rocking chair. Everyone knows Vala’s is essentially one large, outdoor photobooth, but we fortunately had a friend or two wandering by who could help take our picture when we needed it. 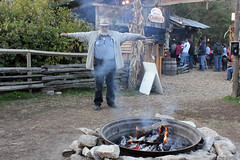 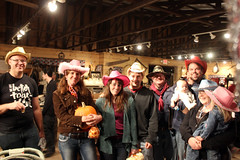 We didn’t buy any overpriced pumpkins during our visit, but we did get some succotash for dinner and hear some kind of a ghost story by the campfire as the sun went down. We even got Hannah her own pink cowboy hat down at the gift shop. We’ve been getting group pictures wearing hats a number of times already, so I figured it was about time we bought one. Hannah even picked it out herself, and I bet it’ll still fit when we come back again next year.