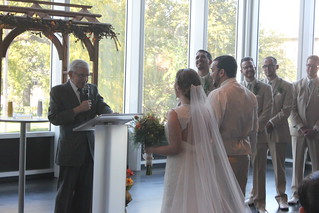 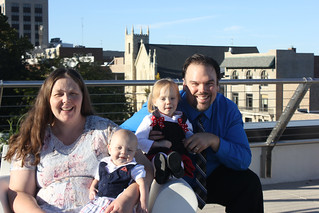 Over the weekend, Vivian and I made our way back to Cedar Rapids (with Hannah and Aaron in tow) to attend a wedding for Caleb de Souza and Lacie Thompson. Caleb is my cousin Mary Ellen’s son, and I’ve known him since he was about two or three years old, so being able to see him get married as a grown man was quite an experience (and it reminded me how old I really was). The wedding ceremony was held at the surprisingly picturesque Cedar Rapids Public Library, which had a beautiful view of Greene Square Park from the Whipple Auditorium.

My Uncle Ben was the officiant, of course, and the ceremony had a number of interesting choices in music — including a wedding procession made up entirely of Beatles songs. The father of the bride gave his little girl away, sand was poured, and many tears were shed. Even more amazing was that Hannah and Aaron were perfectly well behaved throughout the entire event (though Aaron had a bottle to keep him occupied). We stuck around to greet several of our family members, many of whom broke away for official wedding pictures. My cousin David was there with his photographer wife Bridget, and she was nice enough to snap a few family pictures for us up on the lovely “green roof.” 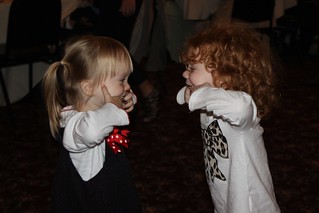 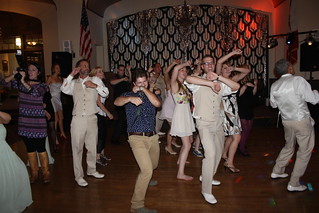 We all made our way a few blocks north to the Masonic Temple for the reception, where the real fun started shortly after the bride put on her running shoes. Caleb and company made their way into the grand ballroom to Michael Jackson’s Beat It, they kissed a couple times, and then we all started stuffing our faces at the buffet. Cake also happened, which helped fuel a bit of a sugar high for the grown-ups before the dancing started. Caleb and Lacie are both very gifted singers, so the bride and groom’s first dance featured Lacie singing Christina Perri’s A Thousand Years, and the mother/son dance had Caleb singing Mark Harris’ Find Your Wings, which was just beautiful.

In the meantime, Hannah made a few new best friends on the dance floor, spending a good portion of her sugar high dancing around, playing ring-around-the-rosy, and learning how to make funny faces before inevitably crashing into Uncle Jim’s arms at the end of the night. Vivian and I had to cut and run just as the line dancing got underway, but we both did take a few minutes out for a dollar dance or two. You can’t have a proper wedding without dancing, of course! 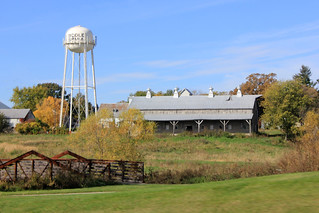 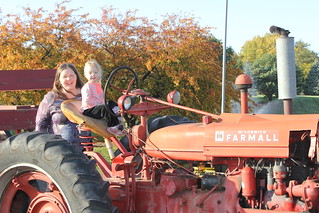 The next day, Vivian and I spent the morning roaming the countryside exploring the autumnal fireworks in the trees around Cedar Rapids. Naturally, that took us down to the Amanas, hunting for such legendary things as Iowa’s largest rocking chair. We got in a few quick family photos and stopped by a shop or two for fudge and peach wine. We even got in time for Hannah’s first ride on a porch swing before heading out. The kids both slept all the way to Cedar Rapids, where we had lunch/dinner at the Machine Shed, where I’d taken Vivian back when we were just dating way back in 2007. We filled up on chicken fried steak and got some obligatory photos on the tractor out front before calling it a night.

Congratulations, Caleb and Lacie! I hope you have a wonderful, happy life together. See you at the next reunion, whenever that may be.