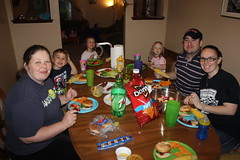 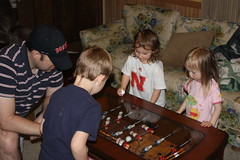 On Friday, we were hoping to take advantage of some lovely springtime weather and have a picnic with our friends, the Mills. Unfortunately, it seemed rain was in our forecast, so we just invited them over to grill out on our deck instead. It seemed to work out fine, as the burgers tasted just as good eaten inside, and we even brought in a fragrant sprig of lilac inside to liven things up a bit. Later on, we took the kids downstairs to play a bit of Foosball — a first-time experience for Hannah — and then we finished the evening up with some tasty watermelon cake. 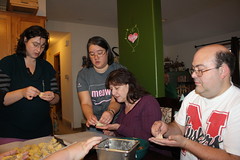 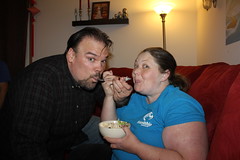 On Saturday night, we celebrated our friend Jen’s birthday, and as usual that meant eating massive amounts of food. A handful of us were put to work folding pot-stickers (after Jen showed us how), and we also wrapped up a bit doughy dumplings, all of which were steamed to deliciousness before being eaten. Also available for the eating were some tea eggs, turnip cakes, and a couple pizzas stolen from Fong’s Pizza — General Tso Chicken and Crab Rangoon. There was even red bean ice cream that Vivian and I had to share in an adorable way.

An assortment of food-related shows on Netflix played in the background as Jen opened up presents, which included a Firefly-themed version of Clue and a birthday card or two. A few tiny bunnies also made an appearance to cuten things up (though we all know they will eventually be eaten). It was nice to catch up with a handful of our mutual friends, including Jessica, who somehow made it back to Nebraska and even came to church with us the next day. 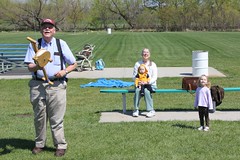 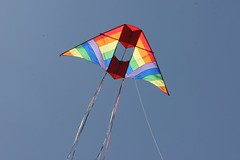 We got some extra time with the grandparents on Sunday, as we took Hannah and Aaron out to fly a kite with Grandpa and Grandma Johnson. Hannah had a tiny kite of her own to play with, though it didn’t stay up for very long. Grandpa got his trusty rainbow kite aloft with Cow Baby along for the ride once again. Hannah actually amazed us by remembering putting Cow Baby on a kite whole year ago. (Aaron mostly crawled around looking cute, wearing in his hoodie or his three-piece suit.)

The next day, mommy took the kids to grandma and grandpa’s house to check out a nest of baby robins. Mama Bird is apparently making a nest of the electric box again just like she did a year ago. Spring is definitely here at last.