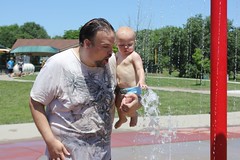 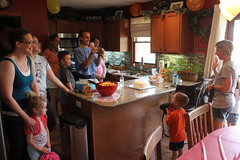 Summer’s almost here, and that means lots of hot and humid days. Over the lunch hour on Friday, Vivian and Lexi brought our cluster of kids down to Seymour Smith Park at 72nd and Harrison for an hour or two in the sun with the “all play” splash park. Hannah had visited last year, and now Aaron was big enough to crawl around and get a little wet. Of course, he and August also crawled around the interactive playground area as well, getting plenty of sun in-between coatings of sun screen.

Then on Saturday afternoon, we dropped by the Lenart house to give Kara a surprise (40th) birthday party with a bunch of our mutual friends. 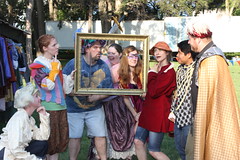 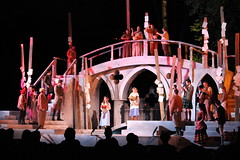 On Saturday evening, we made our annual trip down to Elmwood Park for an evening with Shakespeare in the Park, courtesy of Nebraska Shakespeare. I came down early to spread out a big mesh floor so a dozen or so of us could spread out to enjoy the show with all the vittles we brought. We also spent a good amount of time before the show playing dress up with the variety of accouterments (and weaponry) available at the dress-up tent. I think in a year or two Hannah’s going to be old enough to join the rest of us kids in our medieval play.

Speaking of play, the production of As You Like It was very good as well. I’d knew next to nothing about the play myself when we arrived, but Vivian and I were able to follow along with the plot fairly easily. I think once you’ve seen a few Shakespearean Comedies, you start to get the gist of them — gender-bending characters, wrestling matches, foolish comic relief and several weddings at the end to wrap things up. The Company added their own touches with animal puppetry and some Celtic music of sorts, giving us a reason to have a Hoedown at the end of the show. 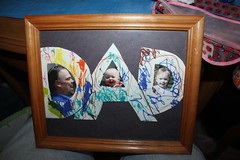 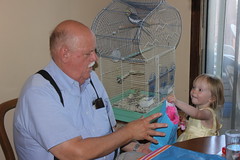 On Sunday was Father’s Day, and once again we had three dads in attendance. The ladies made us men-folk a batch of flatiron steaks with potato and fruit salads. Hannah got to showcase her artistic talents via some gift bags and a nice little photo frame of “dad” for me. Mostly, it was a nice, lazy Sunday, one I was grateful to have to do nothing at all in particular other than eat and visit with the family, which was downright lovely.

Thank you, Vivian, for making me feel so loved, and thanks Dad for being such a good example for me as a dad myself.