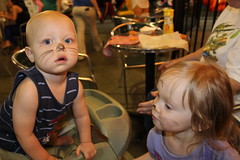 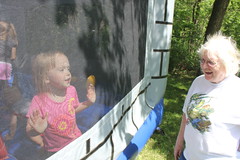 Vivian and I got to spend a little more quality time with the kids over the weekend after having a long, three-day weekend with just grown-ups. On Friday, Vivian and Grammy took them over to the Children’s Museum to see the new Lego exhibit, so I stopped by as they had a pretzel and rode on the carousel and the train. There was also some kind of Princess event downstairs that involved lots of foam falling from the ceiling.

On Saturday, Hannah and Aaron went to Toni’s house to celebrate her grandson’s seventh birthday. Parties at Toni’s house usually involve a bounce-house, so both our kids got to have a little time hopping around in a giant castle and burn off some energy in the afternoon. 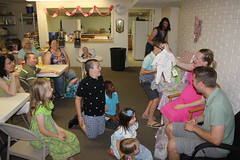 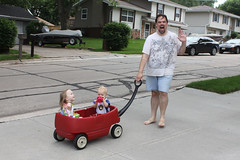 On Sunday, we had another potluck luncheon at Twin Valley Church and then hosted a baby shower for Kelly, who’s expecting a girl very shortly. This particular baby was very much a surprise, as Kelly had given up on having a second child many years ago (and now will have a ten-year-old boy and a baby girl).

That afternoon, I finished assembling a new red wagon we got to tow around our two kids, and I was able to take them on a nice little walk over to Grandma and Grandpa Johnson’s house, completely  on a whim. It’s so nice to have them so close by!