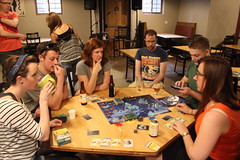 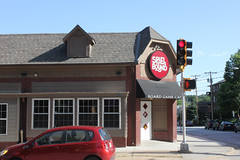 On Wednesday, I finally dropped by Spielbound — Omaha’s one-and-only Board Game Cafe — for the first time with a cluster of folks from AIGA. Vivian and I are acquaintances of Kaleb and the gang who dreamed up the place, and we were also one of the many Kickstarter backers who got the place up and running last year, so I thought it was time to stop by and check it out.

It was every bit the Hipster Hangout I had been expecting, with local beer from Brickway and Cherry Mead from Moonstruck on tap, and thousands of games to go around. I’m not really a board game person, since it seems every game shown to me takes about an hour to explain and several more to complete. We did find a copy of Pandemic, which I’d played once with Vort and Michelle in Kansas City years ago. It’s a game where all the players play cooperatively against the game mechanics, so explaining the rules as you play is perfectly fine. I also threw in a copy of Monty Python Fluxx, before calling it a night. 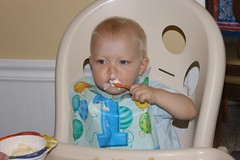 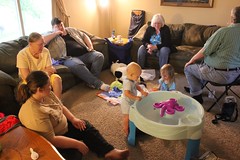 On Thursday, our little boy Aaron turned one year old! We had a bigger event planned for him on Saturday, but we invited the grandparents over (and Uncle Jonny) to watch Aaron open a few presents and have some cake and ice cream for the very first time. His big present was a large, plastic water table, which finally gave Aaron a place to splash happily about other than the toilet. 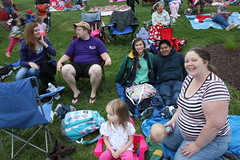 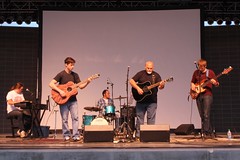 On Friday night, the Sumtur Amphitheater had its first free Friday night movie of the season — Big Hero Six. None of us has seen the movie before, but Vivian and I were able to enjoy it despite wrangling two kids and enduring a brief, passing shower. A handful of our usual friends came by to watch the movie with us in the drizzle. There was also a Pink Floyd cover band (aptly named Floyd) that got up to play a few songs before the show started. 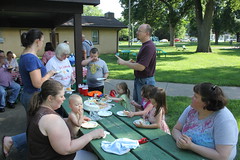 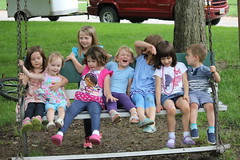 Saturday was Aaron’s big day, of course. We nabbed a picnic shelter at Washington Park in Olde Town Bellevue and got a couple grills fired up to celebrate our little boy’s first birthday. Both grandmas and grandpas were there, of course, as well as a cluster of Aaron and Hannah’s little friends, a nice cross-section of people who would otherwise never meet. Aaron had fun with a pinwheel from Lisa as the bigger kids climbed on the swings, slides, and seesaw, easily having fun without the aid of electronic toys. Jack manned the grill, and Donna baked a big, beautiful Winnie the Pooh cake, which Aaron’s enjoyed so much that he wound up literally licking the plate clean afterward.

I still can’t believe it’s been a year since we took our little boy home from the hospital, but it was great to celebrate with so many of our good friends. Happy Birthday, Aaron!