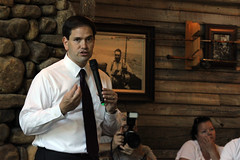 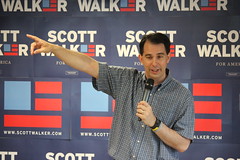 One of the benefits of living near the Iowa border is being able to cross over every four years to meet a couple of the two dozen people running for President of the United States. This week, I got to shake hands with Scott Walker and Marco Rubio, who dropped by on Saturday and Friday, respectively. I enjoy being able to say I met candidates in person before voting for them. Rubio met with a cluster of supporters at Uncle Buck’s just off the Interstate, suffering from a bit of a cough and malfunctioning mike, but he stayed around afterward to shake hands and meet just about everybody afterward.

Scott Walker had about twice as many people crammed into a steamy meeting room at the HyVee on Broadway, but he somehow seemed quite refreshed and ready to meet people both upstairs and downstairs in the cafeteria afterward, where the spillover crowd had been redirected. I’d been following Walker since his battle with union thugs up in Madison made headlines back in 2010, and his stance on school choice is appealing for me, as I’d like to get Hannah out of the current district we’re stuck in. I still haven’t decided who to vote for — and I have over a dozen candidates to meet before I do. I wouldn’t even write off shaking hands with a Hillary Clinton or Bernie Sanders, though I’d probably get roped off if I tried. (I know they’d try to lasso this guy, who keeps showing up at events like these.) 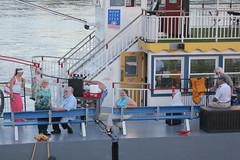 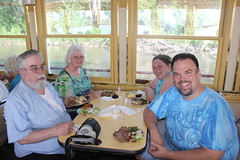 On Friday evening, Jack treated Donna, Vivian and me to dinner on the River City Star for Donna’s birthday. It was quite steamy and in the 90s all day long, but we still enjoyed dinner together and got some fresh air on the upper deck as we were taken up and down the Missouri River for an hour or two as the sun slowly set. We even had some live music buy a one-man band playing a steel drum and some kind of electric clarinet (I think).

I suggested getting ice cream at Ted & Wally’s afterward, but I could only imagine what the line would look like (and the parking) on a hot Friday night in downtown Omaha, so we settled for lemon cheesecake back at Jack and Donna’s house, courtesy of Vivian. 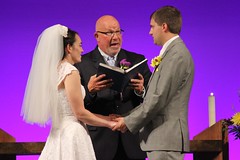 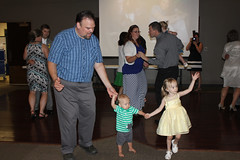 On Saturday, we went to Anne and Brandon’s wedding. They had a ceremony at Beautiful Savior Lutheran Church, which was thankfully brief, as we had two squirmy kids to hold onto as the couple said their vows. Hannah even announced loud enough for the whole room to hear, “I want to get married!” Hannah got a few minutes to rock out in the children’s area before we said goodbye to the happy couple. They came right back for pictures, of course, before we all moved along to the reception up at Christ the King Catholic Church.

We had dinner and cake with our gang of friends, and then we had dancing with live music from a polka band. Brandon turned out to be quite the dancer, doing some kind of routine with his mom to various songs, including music from Super Mario Bros. I’ve never really learned how to polka, but that didn’t stop me from pretending with Hannah and Aaron as we shuffled about in a circle. It was a relatively late night for the kids, as Hannah enjoyed running in circles with the other little ones in attendance, though Aaron crashed all on his own around eight. We eventually headed home about an hour later, ready to turn in early in anticipation of a long, fun-filled anniversary date the next day.