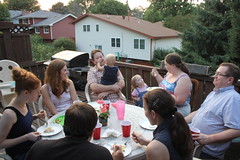 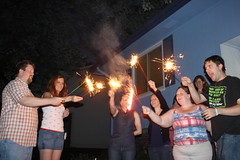 Oh my! Another Fourth of July! One nice thing about The Fourth falling on a Saturday is that we get a full three-day weekend to set off explosions before going back to work on Monday. On Friday night, we invited a cluster of our friends over to grill out on the deck, and then we proceeded to the driveway to shoot off some Roman candles, sparklers, a giant flaming sword, and an assortment of other heavy artillery to celebrate America’s birthday. Hannah and Aaron were up to say hello to most of our friends, but they were both asleep by the time the sun went down (and somehow managed to sleep through everything). 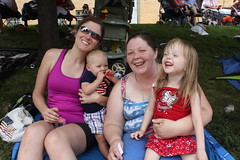 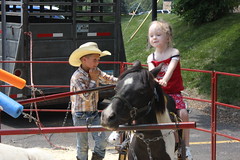 On Saturday, Vivian and I took the kids up to Ralston to sit and watch their Fourth of July parade, an event we’d danced in several years before but now just enjoyed watching. Hannah (and Aaron) were able to get a pony ride in before the parade kicked off. There was the usual assortment of politicians, including a couple vying for Lee Terry’s old seat, frightening clowns, Shriners, and Star Wars cos-players. Hannah and Aaron seemed to enjoy the parade, particularly the candy and popsicles getting handed out to spectators. 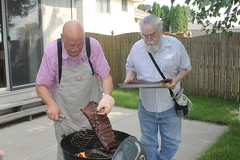 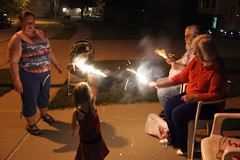 Then that evening, we went to my parents’ house for dinner with then, Vivian’s folks, and Uncle Jonny. My dad smoked some barbecue ribs (which Aaron got to try for the first time), Jonny made some homemade salsa, and Vivian put together a lovely red, white, and blue cheesecake. She was quite proud of how the layers all stayed separated. After the sun went down, we went outside to set off some fireworks, including a neat little bag I got just for Hannah. She seemed to enjoy the snaps, the fountains, and we even had a few minutes of fun with sparklers, at least until one burned a hole in Grandpa’s shirt.

In the end, it was another fairly successful Independence Day. I’m also quite glad the rain held off until Monday, when we got to grab “Shark Week” cupcakes at Jones Bros an have pizza at Godfather’s for lunch in the midst of getting soaked.