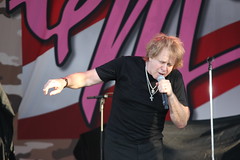 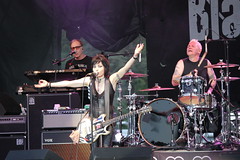 It was another fun-filled weekend here in Omaha, once that require me taking a whole day off in order to enjoy it properly. The fun started on Friday, when Vivian and I put on sunscreen took the kids on down to Memorial Park for the annual Bank of the West Celebrated America concert. This year, they brought in Eddie Money and Joan Jett and the Blackhearts to fill the jam-packed park with rocking music I remembered from the 80s. We invited the Dougans and Jon Paper to share a blanket with us as we most kept wrangling the kids in-between photo sessions with the band. Our friend Jessica — on duty with KPTM — also stopped by to do an actual TV interview with me.

This was Hannah’s third concert at Memorial Park, and the third (and final) time she’s got to wear her cute “peace” outfit. It was also the first time Aaron got to see real fireworks, and it was cute to see his staring in awe and trying to touch them by reaching out his hand. The emcee claimed it was twice as long as usual, but it sure didn’t seem like it. I’m not complaining though — it was the only way to end the evening with a bang! 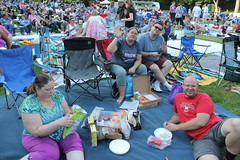 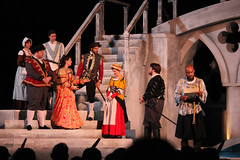 On Saturday night, we made a second trip down to Elmwood Park to enjoy another evening of Shakespeare on the Green, this time to see the tragedy Othello. We forewent the Shakespearean cos-play this time, but we did sit in on a panel discussion with the director and some of the cast for a brief chat about the swordplay on stage. It was also bring-your-pet night, so the emcee handed out a few prizes for some animals who dressed up for the evening.

We enjoyed some vittles with Phil and Jen and Jon on our blanket and opened a bottle of wine (or two) before the show got started. The show itself was terrific, of course, and it had many of the same cast members of As You Like It playing different roles (and fighting with swords). 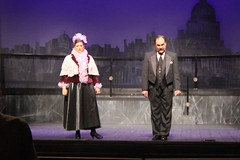 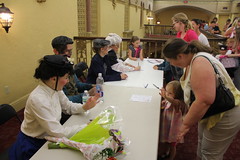 We had some more theatrical fun the next day with Hannah down at The Rose theater. Our mutual friend Lisa won a set of four tickets and invited us to see Mary Poppins. It was a delightful production that seemed to captivate Hannah, and she managed to sit (mostly) still for the two or some hour performance. A few of the actors came out for some Q&A after the show, and we even got to have autographs upstairs with a few of the cast members.

I was impressed with the lovely old theater, which still carried much of the original 1920s charm it had when it was built as the Spanish-style “Riveria.” They also were very kid-friendly, with a “wiggle room” with its own simulcast of the play, so parents could continue to watch the show even if their kids needed to get up and run around.