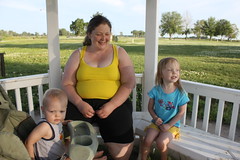 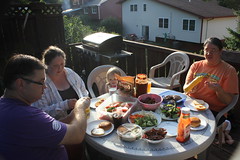 The heat is on again, with temperatures climbing back into the summery 90s and feeling more like July is supposed to. We did have one lovely cool day last week and took the kids down to Haworth Park to enjoy. Aaron got to crawl around in clover and try out a slide for the first time, and Hannah got to hang out in her own “Gazebo House.” We last visited this park two years ago, when it was still mostly devastated from the flood of 2011. It’s been improved quite a bit since then, but nothing like the glory days when we had our Comic Genesis picnic here in 2010. How’s that for reminiscing?

Then on Friday, we had our foodie friends Phil and Jen over to have some burgers out on the deck. Apparently bacon, egg, and kimchi are the perfect combination of toppings for a hamburger. (Just be sure not to wear anything white.) The oppressive July heat was already setting in, so we spent the rest of the evening inside watching the crazy surreal black comedy film Rubber. 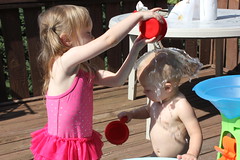 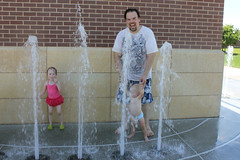 On Sunday afternoon, Aaron got dangerously close to taking his first steps, and then he spent an hour or two with Hannah splashing about in the water table on our deck. Then on Monday, we had a family picnic at Stinson park for lunch. Jones Bros. had a special on ice cream cones, and then the kids got to run about in the fountains for a little while before Hannah went off to a dentist appointment (where she got her teeth cleaned like a champ).

On Tuesday, I got a day all to myself and spent it having lunch with my dad at Louie M’s Burger Lust and puttering around the house. I found a $50 gift card just for cleaning out my car. All in a day’s work!