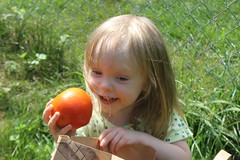 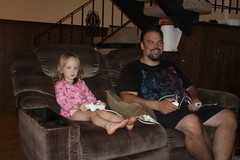 In case you couldn’t tell, it’s summer. The hot, steamy days have been good to our tomato crop, and Hannah got to pick her first vine-ripened tomato from our garden (which we used to make bruschetta). We spent some quality time at Grandma and Grandpa’s house last Saturday as well, giving Vivian some “me” time while sampling some mystery greens, having burgers and watermelon, and playing some video games. Speaking of which, Hannah got to play our Wii for the first time the other day, taking a spin at Mario Kart but mostly just enjoying being the “princess” on the screen. Aaron also got to try pizza for the first time. (News flash: he loved it.) 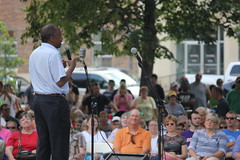 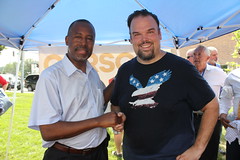 Then we had a big, fun afternoon on Sunday, all thanks to Dr. Ben Carson. The world-renowned neurosurgeon and current presidential candidate paid a visit to Council Bluffs. My parents came along for the hot, muggy afternoon as the man with “gifted hands” spoke to a crowd of a thousand people or so (which included the usual cast of troublemakers). He spent some time talking with the media afterward as everyone crowded around, and then he spent a good hour shaking hands at the meet-and-greet tent. A live band played some classic rock for the crowd and then Mary Rice Hopkins and Puppets with a Heart (who has a TV show on TBN) put on a puppet show for the kids with her counterpart Darcie Maze. There was also face-painting for the kids and free sweet corn, so Hannah got made-up for the first time and Aaron got to eat his first-ever ear of corn.

Dr. Carson took the stage again for some Q&A before calling it a day. I was amazed at the man’s stamina, as he was in constant motion from three to six o’clock without so much as a bathroom break (that I could tell) in-between. I also give him props for being the only President candidate I’ve seen so far to arrive on time. It was the most fun I’d ever had at a political event before, and I was glad to see another presidential candidate putting himself out there to meet the voters — no ropes necessary to keep anyone away.