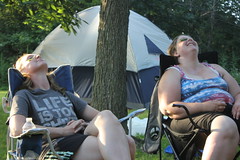 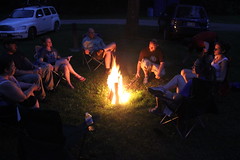 Vivian and I just finished up a long, hot, and steamy weekend in Boone, Iowa with Jenny Dougan (née Arnold) and our usual bunch of Happy Campers. It’s been a tradition for Jenny to host a camping trip, and this year she and Kody decided to take us to the Des Moines river for some tubing. It proved to be convenient, since we were closer to people like Kody’s Mom, who brought by an emergency delivery of beer for us.

It was also ridiculously hot and humid all weekend. After setting up our tents, we spent part of our Friday night putting slices of cucumber on our eyes before dinnertime. We also found a flurry of feathery bugs of some kind to bewilder us before we put up the campfire and had s’mores. Phil and Jen came with us this time and arrived late with an amazing pop-up tent that was assembled within seconds. 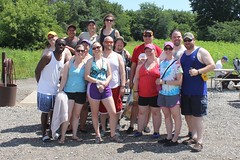 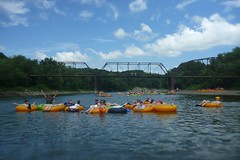 The next morning, Dan and Katie put together some amazing breakfast burritos for everyone, which we ate while playing a game of Baby Jenga. Around lunchtime, we headed down to the Des Moines river for a few hours of tubing together. It was a different experience from canoeing, since we were able to spend half our time bobbing in and out of the tubes in the river together rather than actually trying to paddle someplace. It had been so hot and muggy all weekend that it was a welcome change just to be cool and wet for a couple hours.

I also managed to literally lose my shirt someplace along the river. It was a frankly gut-wrenching experience, as I’d worn this particular shirt for years through all sorts of memories and was very sorry to let it go. Farewell, beige tee of wonder — may your feathers, stars, and roses find another body to cling to along the river. 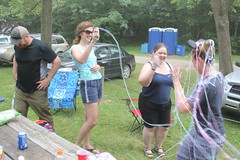 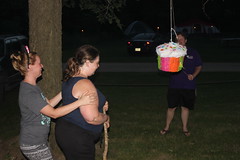 Back at the campsite, Vivian snuck away to get a piñata and silly string to help Tamra celebrate her birthday. We had burgers and potatoes and played a few games as the sun went down, including our usual round of Taboo and a progressive story around the campfire.

A lovely storm came roaring by the campsite around three o’clock, and we got to test the camp-worthiness of our little Aldi tent. It held up fairly well, and there’s nothing quite as cozy as staying dry inside a tent as it thunders and pours outside. 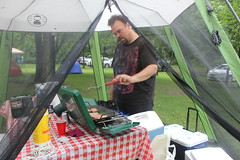 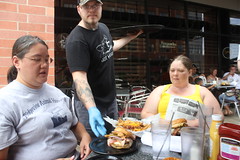 I fried up some Spam for breakfast the next morning before breaking down the campsite. Vivian and I took a trip through Boone to get a glimpse of Mamie Eisenhower’s birthplace before moving on to Des Moines. We stopped by the YMCA in Ankeny just to use their hot showers (and barely missing a roaming Chris Christie). Seriously, nothing feels quite as good after a camping trip than an actual hot shower with soap and fresh clothes.

We headed on to Des Moines to gorge on a couple burgers with Phil and Jen before heading on home. Thanks again, Jenny, for putting together another fun camping weekend. Maybe next year we’ll be able to take the kids!