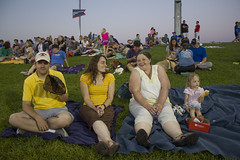 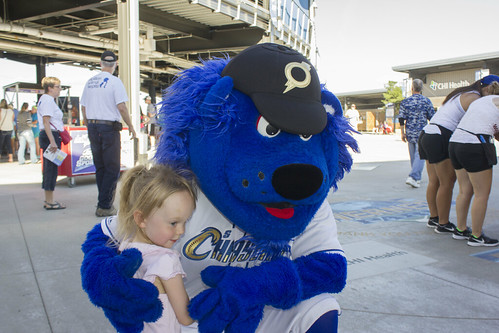 Summer will soon be drawing to a close, and that means it’s time to take in a baseball game while it’s still in season. On “Wiener Wednesday” last week, we took the whole family down to Werner Park to watch the Omaha Stormchasers narrowly defeat the Memphis Redbirds with a home run late in the game. Of course, the game itself took only a passing interest to Hannah, who spent most of her time playing in the Centris playground, going down a slide or two and taking multiple trips on the carousel. Lexi and her kids were coincidentally there for a Royal Rangers event for Jake, so they joined Anne and Brandon as we took a spot on the Berm and had some five-cent hot dogs (and ice cream).

In other news, Aaron turned 14 months and is now walking. Look out, world! 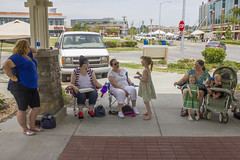 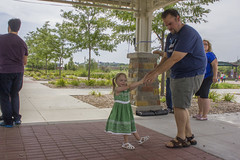 There were lots of other things happening in the Metro area over the weekend, but I wound up spending Saturday and Sunday cleaning and sealing our deck while we had a brief window of not-raining. On Sunday, the gang at church blessed the college-age kids before going back to school (or Basic Training).

After that, we headed down to Aksarben Village for one more Lindy in the Park. We saw only a few familiar faces and a slew of newcomers there doing Lindy Hop under the pavilion. I coaxed Hannah into a dance or two, but the power of the playground compelled her. Aaron also found himself drawn to the fountains like a siren song. 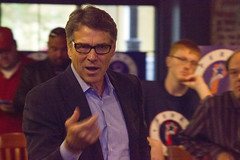 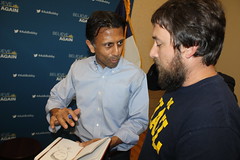 Then on Tuesday, more Presidential Candidates came through Council Bluffs for campaign stops. First was Rick Perry, who visited Barley’s restaurant and bar for a meet and greet. The crowd was decidedly smaller than the ones for Rubio, Walker, and Carson, but that only gave the former Texas Governor more time for pictures, autographs, and questions from the locals. (Tom Becka was also nowhere in sight, possibly because Chris Baker was on site to introduce Perry.)

I got to meet another Governor that evening — Bobby Jindal, who was doing a town hall via his Super PAC Believe Again. About 100 people showed up to hear him speak, including several younger people (and several others who’d come to see Rick Perry in the morning). Many of Jindal’s talking points were the same as other candidates, but what impressed me was how friendly and talkative he was with everyone who lined up to shake hands with him afterward. He chatted with the guy in front of me about where he was going to school (since he wore a Michigan University sweatshirt), what he majored in, and the sketchbook he carried with caricatures of different presidential candidates. I managed to win a copy of his book as a prize during the emcee’s opening pop quiz, so I naturally got him to autograph it before my obligatory selfie.

So that’s five Republican candidates I’d met so far. Only twelve more to go, right? Maybe I’ll even squeeze in a few democrats before the primary’s over.