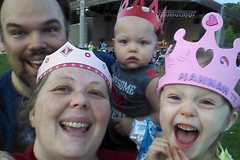 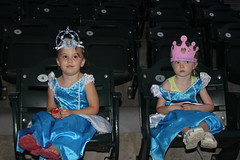 Vivian and I had a relatively quiet weekend with the kids. On Friday night, we took the kids down to the Sumtur for their last free movie of the summer. They were showing Cinderella (the original 1950 film instead of the 2015 live action version), so Hannah naturally had to wear her blue Cinderella dress. They had some crowns for the little ones to wear and decorate, and a girl band played some music that Hannah actually dragged me down to the front row to listen to. She even pulled me up by the hand and said, “Dance!” Who could say no to that?

Lexi dropped by with Sammy dressed in the very same Cinderella dress, which only increased the adorableness exponentially. 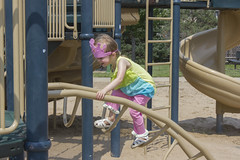 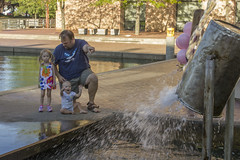 I had the kids by myself for the entire day on Saturday, which involved taking them to grandma and grandpa Johnson’s house so I could mow their lawn, and then spending the afternoon at the park. It was a warm, sunny day, with a few thundershowers rolling in at night that brought gorgeous, fall-like weather back to Omaha.

The next day, Vivian and I took the kids downtown to climb a tree or two and say hello to the statue of Chef Boyardee outside Conagra’s headquarters (Hannah called him “the muffin man” and gave him a hug). The water bucket installation was in full spill mode again, so I showed it to the kids and let them dip their feet in the waterfall display a bit. I walked with Hannah on the riverfront, where she got to “play in art” and watch the ducks come swimming by. Of course, we also stopped by the giant slides, which I got to ride down with both kids in tow. I bought a Groupon just so we could eat at Matsu Sushi for dinner, but they were unexpectedly closed, so we settled for Burger King instead.

All in all, a lovely, quiet weekend, topped off with our usual trip to the park on Monday to swing and have free cupcakes for lunch.