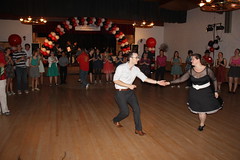 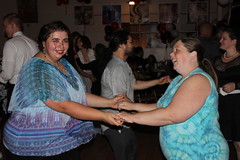 On Friday night, the Jitterbugs held an anniversary dance in honor of fifteen years of Jitterbugs Night Out, a night that was even made 100% official by the Omaha City Council, thanks to our friend Lisa, who happens to work there. It seems like just yesterday I was awkwardly wandering into the Eagles’ Lodge for the first time. The volunteers went all out with elaborate balloon displays, snacks, and one of my favorite swing bands in the area, the Little Harper Big Band to provide the music. I was somewhat disappointed at the lack of true swing dancing veterans at the dance itself, but there were plenty of cool people to dance with. And despite actually biking to and from work today, I managed to stay on the dance floor during nearly every song.

Then at the end of the night, we brought home a bunch of balloons to surprise Hannah and Aaron when they woke up the next morning. 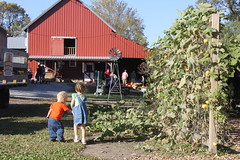 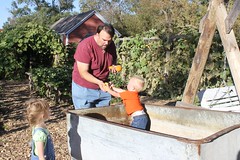 Saturday was a day of getting things done (mostly lawn-mowing), and then on Sunday we spent a long afternoon down in Avoca at the Bloom Where You’re Planted Farm. Having just been to Vala’s a few days earlier, I couldn’t help but notice the little pumpkin patch had the look and feel of a miniature, scaled down Vala’s. They had a corn bin and a water-pump duck race for the little ones, as well as a few of those head-through-the-hole photo displays. They also had a giant tire swing quite a few farm animals for the kids to check out, including goats, chickens, horses, and cows. There was also a hay rack ride, but it didn’t go to the pumpkin patch, because unfortunately they had absolutely no pumpkin crop this year whatsoever. Yes, they had pumpkins for sale, but they were all brought in (allegedly locally) from other pumpkin patches. We did let the kids get their own little pumpkins (aka decorative gourds), which could have grown on some of the vines down by the horse corral.

In the end, it was a nice little place to take the kids on a Sunday afternoon, and its smaller size made it a much easier trip than Vala’s. Vivian and I were able to sit in the shade and watch Hannah and Aaron run relatively freely without losing track of them, something that’s pretty much impossible to do at that other place. 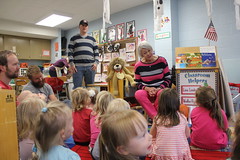 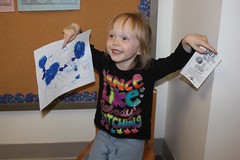 On Tuesday, Vivian brought the kids down to the park to swing a bit, play in some sprinklers, and enjoy a stroll among the beautiful fall colors along the Keystone Trail.

Then that evening, I got to visit Hannah’s preschool along with a bunch of other guys as part of an open-house just for dads. I got to see some of the activities the kids get to do during the day, such as drawing, making paintings with rolling marbles, and hammering golf tees into foam blocks. Then Hannah’s teacher, Mrs. Sauerdyke, sat us down for “circle time.” This included going over the calendar, the days of the week, and singing a special little song for the dads present, which was very cute.

Afterward, they gave us vouchers for ice cream at Dairy Queen so we could take our little ones down to get inappropriately sugared up right before bed time. It was a sweet little daddy-daughter date, though. I’m always happy to spend time with Hannah before she’s too old to want to be seen in public with me.