Halloween is nearly here again, and with dropping temperatures and shorter days, you can feel autumn will be moving fast into winter too long. That means taking advantage of the odd warm day at the park to run around in the fountains making footprints is more important than ever. 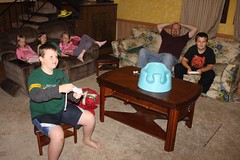 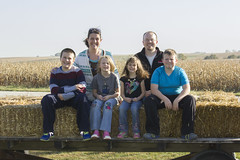 I mentioned in a few previous updates, Pastor Drew Rietjens and his family will soon be leaving Twin Valley Church to move on to Clear Lake, Iowa. To thank them for all their years with us, Vivian and I invited them over to our house for an evening of tacos of playing Wii Mario Kart downstairs. I always love having other kids over to the house, since Hannah and Aaron both seem to love playing with other kids (which gives us grown-ups time to chit-chat, of course). We also had a couple family portraits to give to the Rietjens as a going-away present, but we naturally forgot to give those to them until Sunday. 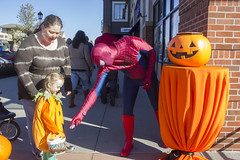 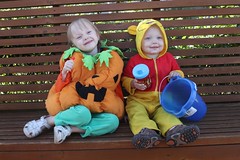 On Saturday, we took Hannah and Aaron down to Village Pointe to go trick-or-treating at the mall in their little costumes. We actually put Hannah into her pumpkin outfit for her annual Pumpkin Outfit picture, but she somehow didn’t want to take it off, so we let her wear it all afternoon. She seemed initially reluctant to take candy from strangers at the mall, oddly enough, and she enjoyed seeing all the other kids dressed up as goofy characters even more than free candy. I also helped a bunch of guys move a giant pumpkin or two up onto a big pumpkin display. They’d had some kind of pumpkin-carving event earlier in the day, but I didn’t stay around long enough to watch them light them al in the evening.